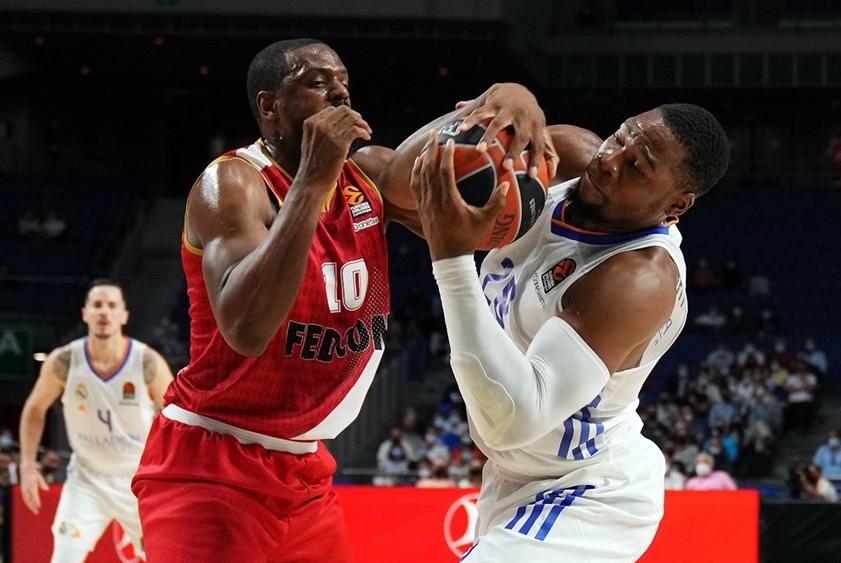 Real Madrid played three games in one against Monaco and won the two fundamentals: the first and, above all, the last. A journey from solidity to misalignments, from slack to tightness (94-86). In the first 15 minutes, Laso’s team was a roller (44-19). Between the 15th and 37th minutes the Monegasques came back clinging to the feverish success of Mike James (81-83). And, in the last three minutes, the Whites signed another resounding 13-3 run, with five points from Yabusele (again the best Real Madrid player), four from Rudy and as many from Heurtel, to grab their second win in three days of the Euroleague. Madrid held the pulse and Monaco’s legs gave out. The stage fright imposed by the locals at the beginning than the jindama that Mike James later screened in the WiZink stands. The Portland bomber touched the big door, with 24 points and 10 assists, but left through the infirmary after a bad fall in the final moments. He won the standing ovation and recognition and Laso’s the award.

On the eve of the first continental double day, Laso asked his team for union solidarity to share the ball in attack and to help each other in defense, with the idea of ​​containing two teams with powerful physical displacement such as Monaco and Panathinaikos, next rival of the whites this Friday. And Madrid came out applied and involved to fulfill the mission. With a 13-1 partial in just four minutes thanks to a handful of steals that launched the first white counterattacks. The Madrid downpour did not stop there. The success in the shot, 9 of 10 in field goals with 3 of 4 in triples in that section, promoted the forceful staging of the locals (25-6, m. 7).

Yabusele and Hanga’s points and Heurtel’s assists (4 of his team’s 8 at that point) melted Monaco in a flash and the White defense left Mike James dry. The territory was marked in the WiZink Center. There is no trace of the thriving Monegasque team built with the money of the Ukrainian magnate Sergey Dyadechko and cemented around many acquaintances of the ACB (such as the ex-Azulgrana Westermann, the ex-Valencianists Thomas and Motum, the former from Bilbao and Valladolid, Danilo Andjusic, and the aforementioned ex-Baskonist Mike James). No one was saved by Mitrovic’s team against an unleashed Madrid. But the night was longer than it initially seemed.

Laso’s team, thick the previous day against Olympiacos, scored 44 points in 15 minutes, with 90% from shots of two and 50% from the triple, with 15 assists in the first half. But such offensive waste distracted the whites in defensive work. And, in just three minutes, Monaco scratched a partial 5-14, from 44-19 to 49-33, to test the rearmament. The purpose of amending the French team coincided with the moment in which Madrid’s foot came off the pedal. Donta Hall’s verve and silent quartermaster shook the biorhythms of the match. From the guateque madridista to the accessible difference for the visitors. From that 44-19 in the most exciting minutes of Madrid, to 7-20 in five minutes before the trip to the changing rooms (51-39, m. 20). “Our first half has been catastrophic. We were impressed by playing against Madrid, ”Mitrovic said despite everything.

After stage fright, Monaco was settling on the parquet and, with several turns of the screw in defense, gradually adjusted the accounts. Mike James announced his boiling point with a running triple, as monumental as it was bizarre, a la Stephen Curry, and made it 51-60 on the scoreboard. Later, with another filigree, he reached 18 points and lowered it even further, to 64-57 in the 27th minute. Heurtel then took a step forward to grease the Madrid attack. But Mike James completed his master class with 14 points in the third quarter, which closed with another museum triple (72-65, m. 30). Then Westermann brought the outcome to the ledge with another bingo from the perimeter and Will Thomas sealed the comeback (81-83 with 3m left). The third game of the night started and Laso’s team took it. The home defense only conceded three free throws by Westermann in those final 180 seconds. Five points from Yabusele relieved Madrid at the key moment and a triple by Rudy from eight meters sentenced the white victory.