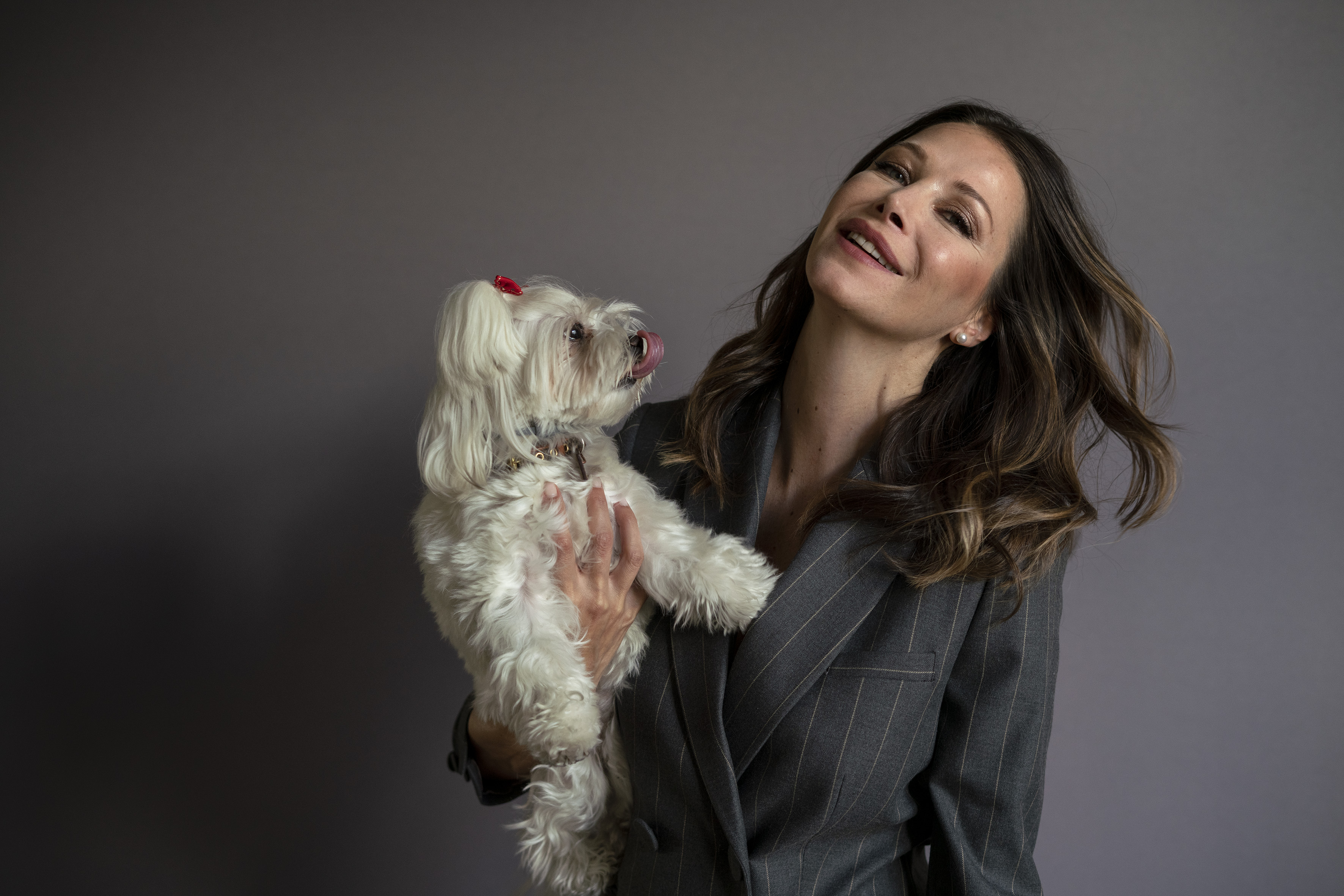 The pandemic took her husband and Marquis de Griñón, Carlos Falcó, and her father. That is the reason why Esther Doña has written the book The life of a great man through my eyes as a therapy published by Planeta. In it, the model tells how her love story was: from the whatsapp which were written at the beginning when he came out of the hole. Now he has rebuilt his life with Judge Santiago Pedraz. We know it from him Hello!, but also because before this interview he had lunch with her at the Hotel Palace in Madrid and came over to say hello. Esther Doña stays to pose with her dog, Chloe, who wants to be in the photo and sometimes it seems that she also responds.

Question. You couldn’t say goodbye to your husband, Carlos Falcó, how did that affect you?

Answer. He left home vital, as it was, with his three bottles of oil, for the hospital. And the wine? I said. “They won’t let me,” he replied. The doctor called me in the morning to tell me that everything was fine and hours later he had passed away. He needed to throw out everything he had. My therapy has been the book. It cost me a lot. He couldn’t leave the house because he thought he was going to come back. I dreamed of it and I was waiting for him, well dressed and beautiful, I had to be beautiful, so that when he walked in the door he would see me there.

P. How much did it cost you to assume that you would not return?

R. Three months later. I was in limbo.

P. And now is it better?

R. Better. The house was falling on us. To me to my dog. It is a palace, with everything that a palace entails: high ceilings, many meters …

P. It is somewhat striking that he has published the whatsapp that were sent at the beginning of the relationship, between flirting and dignity. A double edged sword for love WhatsApp? Isn’t it too intimate?

R. Man! I have not shown all the messages. I have made a selection. Why shouldn’t I post them? I was so proud of it!

R. So proud was he that he printed them. It was not normal to fall in love with whatsapp for an aristocrat. But perhaps, face to face, from the beginning, we would not have fallen in love. Through them, I was able to get to know the person. He was the perfect man, the only thing that wasn’t perfect at first was the age difference, then that didn’t matter. We fall in love with the mind, we need to admire the person we are with; the men, of the physique.

P. They met at a tasting organized by his cousin. He saw you and said: what nationality are you? Doesn’t that leave Spanish women in a bad place?

R. Yes, he saw me and said: What nationality are you? Are you single? He thought, sommelier, it’s not …

P. From minute one, on the attack.

R. Yes because he was fascinated. I was more suspicious. He told me that he wanted to set up a spa based on olive oil therapies. He proposed that business to me. The whatsapp They started with that professional intention.

R. Well, I don’t know. I have asked him many times after. I needed a team and I needed to get to know myself a little more.

P. You say that he reminded you many times later how he had fascinated you, you say, with a little Zara outfit.

R. Well, if I didn’t want to go to that dinner, but I came from the gym, I put on that suit, without cleavage and nothing, simple and super discreet, I gathered my hair in a ponytail and that’s where I went. I don’t know why it fascinated him so much. I think it was the aura.

P. He then gets very motivated, with whatsapp.

R. He even makes me a poem.

P. A poem that if I may comment, is, in my opinion, weak.

R. Well, nothing. No, it is not weak. But the poem brought a lot of trouble, huh. They had never spoken to me that way. I am not a provocative woman. My beauty is different.

P. How would you rate it?

R. Well, it’s not comparable: but more Audrey Hepburn than Marilyn Monroe, like it or not, it’s more subtle. I can go unnoticed.

P. Not with her little Zara outfit. Have you never dedicated a poem to him before?

R. Not and me, besides, it offended me. I think he went out of line on that and that he couldn’t talk to me like that then.

P. Perhaps what attracted her, on the other hand, was that he seemed like a man from another era?

R. Well, I am very old-fashioned, I like to be sent flowers, to open the car door …

P. It is also strong that you came down the first day to have breakfast in your pajamas and he asked you to get dressed so that the service would not be scared.

R. Well, after that I understood that you couldn’t go down to breakfast in your pajamas and that it is your culture, that of the aristocracy. The aristocracy is like that.

R. They are different cultures.

P. From this world?

R. Yes, more and more. Every time society opens up more and they adapt to a modernity. If not, turn off and let’s go. What are we going to continue marrying between bloods?

P. And after all, do you feel marquise?

R. No, I am Esther Doña. And she was not married to the Marquis de Griñón, but to Carlos Falcó. I like the simple things in life. For me, certain commitments were exhausting.

P. Now, he is a couple with Judge Santiago Pedraz. You have said that in life, Falcó himself told them that if they were absent one day, he would like them to end up together. Is that so?

R. He said that when he was gone, he would like someone else to experience the happiness that he had with me. And that it was Santiago. I admired him very much. He admired the brilliance and I saw that in him, besides that he was a very good person. Maybe that should not have been told. But it was so.

P. And what about you confessing that Falcó has been the man of your life, how does it feel to Santiago?

R. With Santiago it is very easy. He was one of our circle. Every day we talk about Carlos, and he does so with great admiration. Why is Carlos the love of my life? Well, because Santiago, I just met him in that regard, I love him very much, that’s why I’m with him. To this day, it continues to be so. It was very genuine. It conquered me. And it has been the best thing that has happened to me in my life. But for the record, Santiago has already asked me to write a book like him.

P. Define genuine: in what?

R. Well, he was unique, he always had a good word for a woman. And he was very happy for the good of others, for the good things that happened to others, even though he did not know them. He was very focused on how society progressed: he was more modern and liberal than me. I am more conservative.

R. No man! But I’m not talking about politics.

P. And of his sister Socialist councilor in the Malaga city council?

R. He got along great with Carlos. I told her: you have the wrong sister. They adored each other.

P. With that chapter that you call The Third Wives ClubWhat did you want to convey?

R. I don’t know, that there is always a rivalry, right? Women are often more comfortable with men than with other women

P. You have also been married three times.

R. And there will be a fourth. I am very conventional. And if I am with a partner, I get married.

P. Does that mean there will be a wedding soon?

R. No, no, no … We have been three months … Later, God will say: at the moment no wedding, no children.