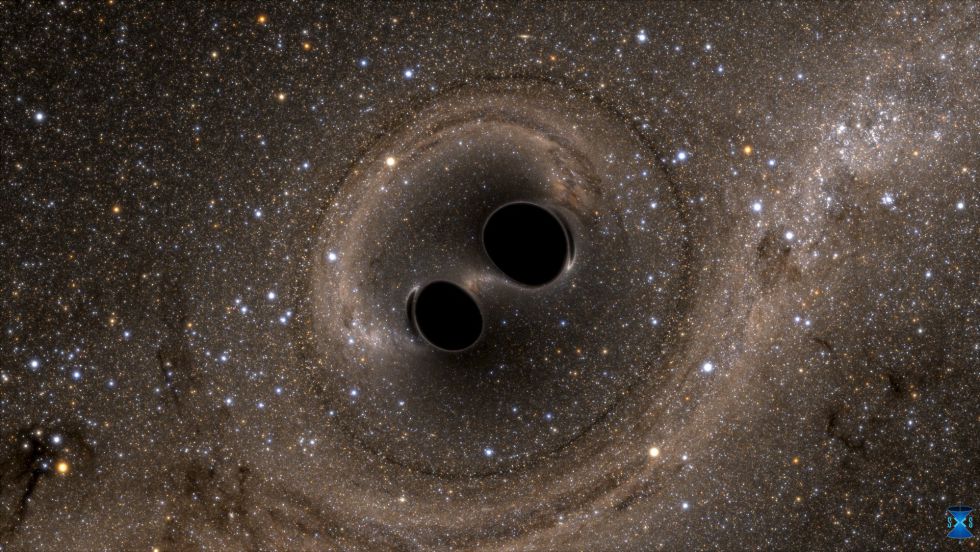 There are several theories about the origin of our universe and the problem is that we cannot verify any of them because we are not able to get to the exact moment in which it happened. And one of the alternative theories to the Big Bang is related, precisely, to a black hole. Although it does not refer to the collision of two supermassive black holes as your question says but to the creation of a black hole in another universe that could have triggered the creation of our own.

In order to explain it to you, I have to first tell you what a singularity is. A singularity is a point where a huge amount of matter is very condensed in a very, very, very small physical space. At that point, the physical laws that govern the rest of the universe, quantum and relativity, stop working, so we don’t know what’s inside the singularity.

The Big Bang theory says that at the beginning everything was very dense, very hot and very energetic, which created, precisely, a singularity, the point that is the beginning of everything. With that first explosion (hence the name Big Bang, even if it is not properly an explosion), our universe begins to expand. As with a balloon, at the beginning, when it is deflated, there is no starting point or beginning of the balloon, but if you start to inflate it and mark two points on the surface, these two points (which in our case could be two galaxies) They will be further and further away from each other as the balloon has expanded. And this is the theory we use, based on the laws of quantum physics and general relativity. With them we can, more or less, explain the Big Bang theory, although there are several things that go a little wrong.

When talking about quantum and parallel universes, the idea is that there could be other universes totally different from ours, but that they happen at the same time.

The other theory I was talking about at the beginning says that our cosmos was generated due to the creation of a black hole in another universe. Here already enters the concept of multiuniverses. It does not mean that there are several universes each with its different reality, but that being in the same reality there may be several universes. It would be like a family, you have a mother universe with its clusters, galaxies, etc., and that at one point creates a supermassive black hole. When that singularity appeared, the creation of our universe could have been triggered, so that it would be inside that black hole that exists within the other universe.

When talking about quantum and parallel universes, the idea is that there could be other universes totally different from ours, but that they happen at the same time, hence they are called parallel. In this case I am talking about it would not be like that, but our universe would be similar to the mother universe because it would have been formed from it.

Both the black hole and the Big Bang concept are the only two things in which we know there is a singularity. Our universe was created in a singularity, so it is not unreasonable to think that the origin occurred in one of these two singularities that we know. In this hypothesis that we are inside a black hole in another universe, what would happen is that since we are inside we could not see what is outside because that is precisely what defines a black hole. So from our point of view, nothing else would exist, and our universe would be the only one.

When two black holes collide, it happens like when two galaxies collide, they mix, recombine with each other, and create a more massive and compacted black hole.

This theory was raised a few years ago, around 2010. The problem it has is that it is very speculative. But in fact it solves some of the problems that the classical Big Bang theory fails to clarify. But as I was saying at the beginning, we cannot prove it.

To summarize, it is not necessary to collide with black holes to produce a universe, a single black hole may be responsible. When two black holes collide, it happens like when two galaxies collide, they mix, recombine with each other, and create a more massive and compacted black hole. But, a priori, they are not forming any new singularity, the singularity, which is the basis for thinking about the appearance of a new universe, is already there before the crash. So I could tell you that there is a possibility that the universe has formed from one black hole, regardless of whether or not it collides with another.

Anna Ferré-Mateu She is a doctor in Astrophysics and a researcher at the Institut de Ciencies del Cosmos (ICCUB).

We respond is a weekly scientific clinic, sponsored by the Dr. Foundation Antoni Esteve and the program L’Oréal-Unesco ‘For Women in Science’, which answers readers’ questions about science and technology. They are scientists and technologists, partners of AMIT (Association of Women Researchers and Technologists), those that answer those doubts. Send your questions to [email protected] or on Twitter #nosotrasrespondemos.