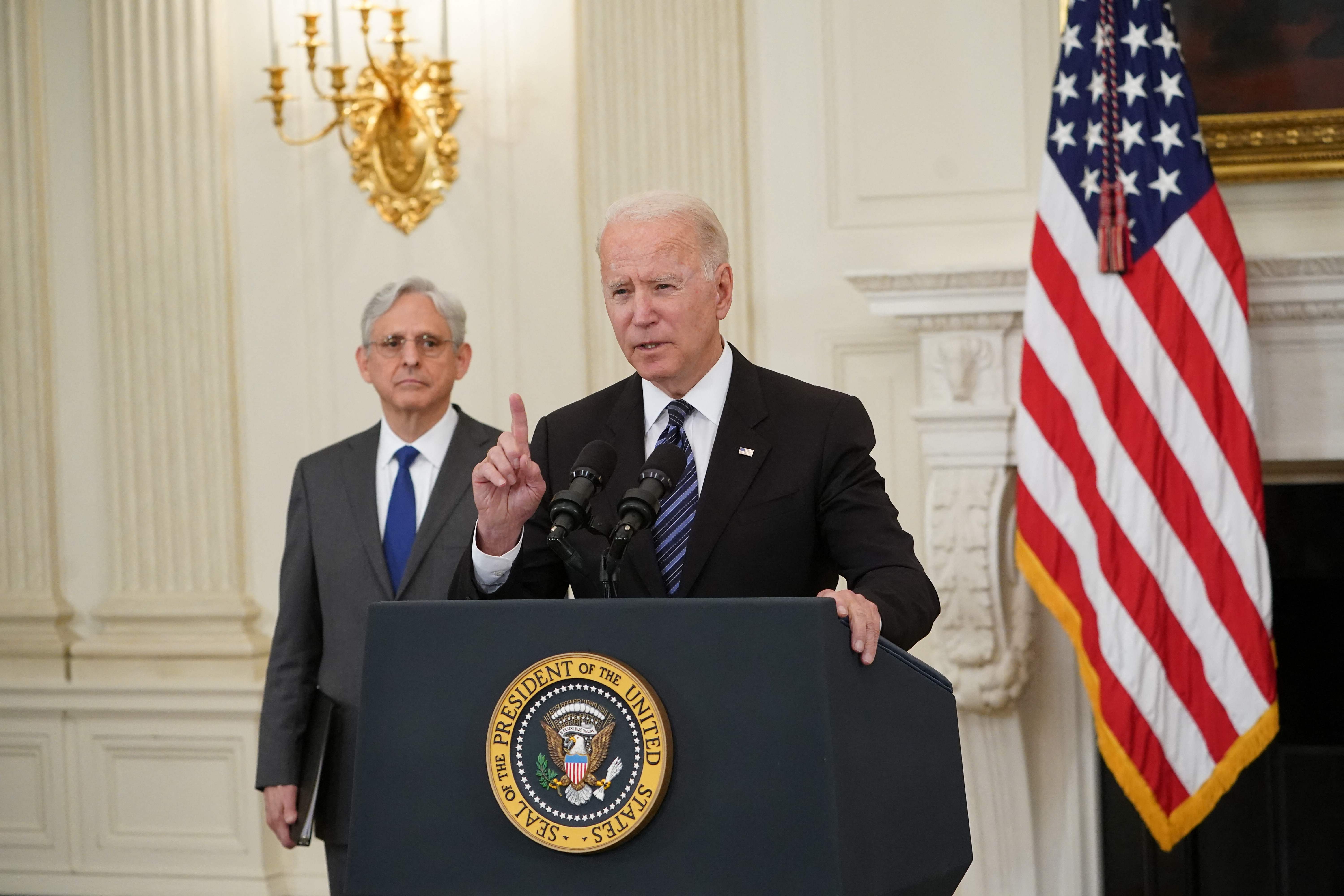 With Republicans accusing Joe Biden’s White House policies of being responsible for the increase in crime, the Democratic Administration has launched a strategy to prevent these crimes on Wednesday to curb the exorbitant figures of violence caused, especially, by firearms. Accompanied by US Attorney General Garland Merrick, Biden reported in his message to the nation that he had met with a bipartisan group of civil and law enforcement leaders to discuss the best way to curb “the epidemic.” that bleeds the United States.

The president made it clear that “there is no single answer that solves such an important problem.” The Democrat dedicated his time to explain, “to all who are at home”, the points that will help curb the violence generated by weapons, which last April, after the succession of several mass shootings, Biden described as a “national shame”.

Then, the president launched a package of measures that, among other things, sought to tighten the control of the sale of kits to manufacture those known as ‘ghost arms’, which are manufactured at home and do not have a serial number. The initiative came as the most ambitious legislation – on assault weapons, for example – was (and still is) stalled in Congress.

Speaking from the White House, the former senator, seasoned on Capitol Hill in many attempts, and some achievement, on gun control, unraveled his plan little by little. The White House is determined to have the background checked of those who try to buy a gun; insist once again on approving the Senate for a ban on assault weapons (“no one needs 30, 40 or 50 bullets in their weapon”); community policies to keep neighborhoods safe and, perhaps the most important of their initiatives, divert some unused funds from the 350,000 million that Biden signed, as direct aid to the economic rescue plan, for public safety, which would make it possible recruit more police officers, upgrade police equipment, and expand efforts to arrest arms dealers.

“We will find him,” he said, pointing to the screen in a warning gesture to those who were listening and selling weapons illegally. “If you sell a gun to someone without having their criminal or psychological background checked, we will take away their license.” At that time, the president reiterated his message of “zero tolerance” towards those who have an arms business and do not comply with the law. Offering data, Biden said that 90% of the weapons found at the scene of a crime were sold by 5% of the dealers engaged in that business. “Enough already,” reported the president.

For the White House, the spike in gun violence suffered by some of the most important cities in the country is “unacceptable”. The Biden Administration’s “comprehensive strategy” is designed to implement “preventative measures that have been shown to reduce violent crime.” Deaths from firearms in 2021 have increased more than 24%, compared to the same period in 2019. And it does not seem that the rates will improve.

The fact is we’ve seen a surge in gun violence across the country since the beginning of the pandemic. It’s unacceptable — and we’ve got to take action to combat it. That’s why we’re announcing a comprehensive approach to prevent and respond to gun crime and ensure public safety.

According to the president, there is a fear that gun violence will be even worse in the summer months, when historically heat causes gun deaths to peak. To this data, we must add that this year, the summer has come hand in hand with the détente in the measures against covid-19, with many States returning to life before the pandemic, and the streets full of people.

The president has emphasized that both some cities and states can use part of the 350,000 million of the rescue, which was approved by Congress last March. Biden has announced that the Administration will collaborate with 15 cities that have pledged to use part of the funds left over from the pandemic to anticipate a potential increase in violent crime this summer. Some of those cities are: Los Angeles, Atlanta, Baltimore and Washington, the nation’s capital.

Republicans are determined to make criminal violence a campaign issue heading into the 2022 mid-term elections, proving that under the Biden administration, crime has skyrocketed in the US “The numbers don’t lie. This is their crisis, ”Elise Stefanik, number three of the Republicans in the House of Representatives, tweeted this Wednesday. Stefanik stressed that it has been the policies taken by Biden that have contributed, for example, to the shootings in New York having grown 64% compared to the same period last year.

Republicans on Capitol Hill keep reiterating a catchphrase that has gained much traction among conservatives: the fact that the demand for police seizure of funds, by the more progressive wing of the Democratic Party, has inevitably led to a dangerous upsurge. in crime. The hashtag #BidenCrimeCrisis (Biden’s crime crisis) is being used to attack the Democrat’s tenure in his bid to regain control of the House and Senate in 2022.

Subscribe here to newsletter from EL PAÍS América and receive all the informative keys of the current situation of the region.