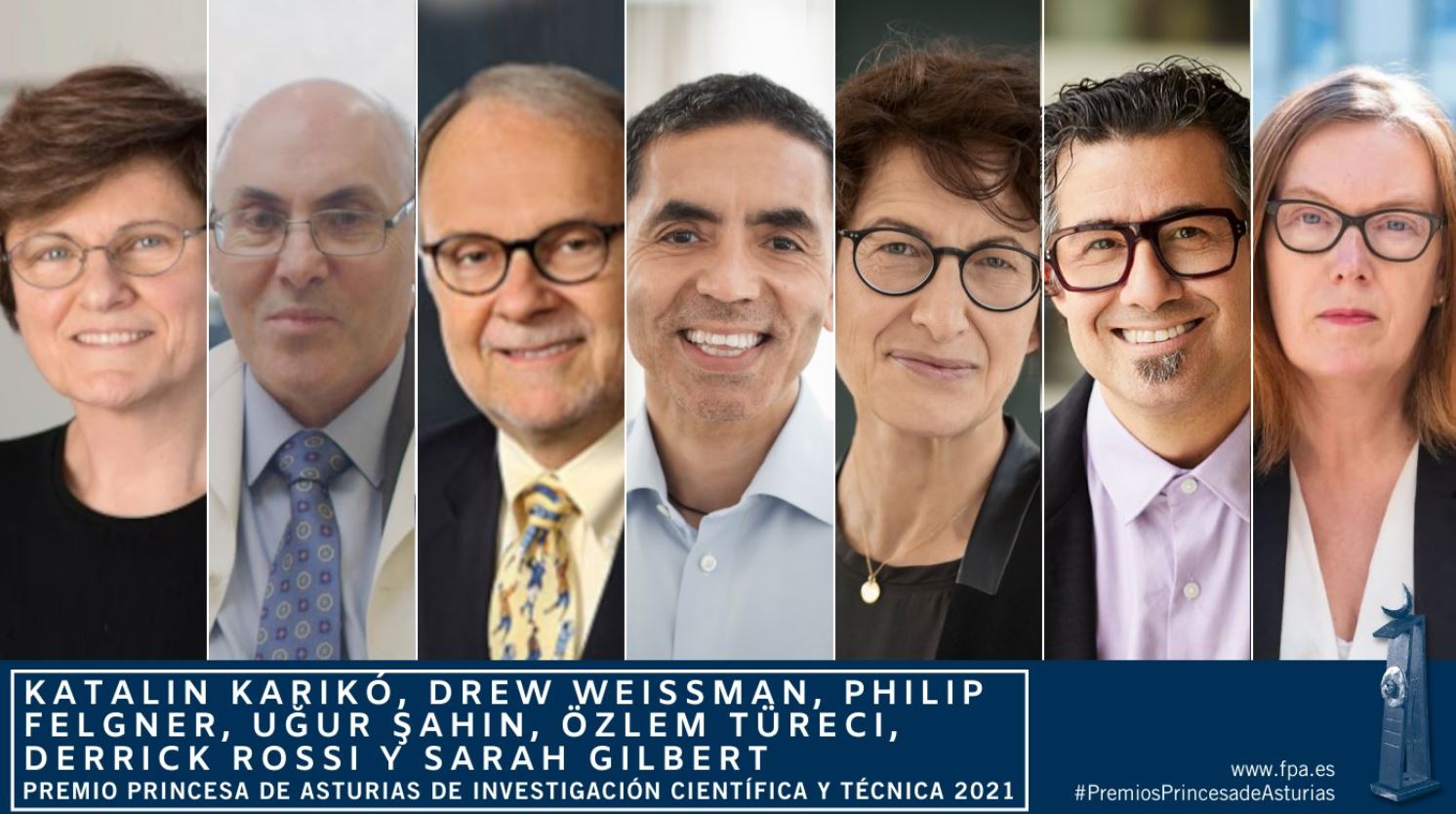 The jury of the Princess of Asturias Award of Scientific and Technical Research has chosen this Wednesday Katalin Karikó, Drew Weissman, Philip Felgner, Uğur Şahin, Özlem Türeci, Derrick Rossi and Sarah Gilbert for the research that has allowed the development of vaccines against covid. For this award, endowed with 50,000 euros, 48 ​​candidates from 17 nationalities have chosen. The jury, gathered by videoconference for the pandemic, has described the winners as “protagonists of one of the most outstanding events in the history of science”: “Their work is an excellent example of the importance of basic research for protection of health on a global scale. With their long trajectories, they have led to innovative applications such as obtaining, in an extraordinarily short time, effective vaccines to fight the COVID pandemic. Both the development of novel messenger RNA technology and the production of adenovirus-based vaccines open a path of hope for their use against other diseases ”.

The Hungarian biochemist Katalin Karikó has seen her almost half a century of work in the shadows distinguished to develop the advances that have allowed the creation of the injections of Moderna and BioNTech, based on messenger RNA (instructions for the generation of a protein that triggers the response immune). His research has been essential for the creation of the vaccine in a time 10 times less than usual for this type of drug.

American immunologist Drew Weissman is part of Karikó’s team, along with Norbert Pardi, from the University of Philadelphia, and was responsible for creating the proper envelope for messenger RNA to reach the muscle cells of the arm and those of the immune system.

Philip Felgner, an infectious disease expert and director of the Center for Vaccine Research and Development at the University of California, has evaluated the immune system response with thousands of blood samples from people who were naturally infected with the coronavirus and determined the increased response of the immunized body with vaccines.

The German Uğur Şahin and the Turkish Özlem Türeci are the co-founders of BioNTech, the company that has created one of the most effective drugs against COVID together with the American pharmaceutical company Pfizer. This alliance facilitated the fastest development in the history of vaccines with a model that allows their production in shorter terms, on a global scale and with an unprecedented efficiency both to avoid the disease or its most serious sequelae and to prevent infection.

Canadian biologist Derrick Rossi was the co-founder of the Moderna company just over a decade ago. Like BioNtech, it relied on Katalin Karikó’s research to develop drugs based on messenger RNA and have the technology ready to face the pandemic after studying the genetic information of the new coronavirus.

British Sarah Gilbert, a researcher at Oxford for almost three decades, has worked on the development of vaccines that use a viral vector, a modified virus capable of acting as a vehicle to introduce foreign genetic material into a cell. Together with the Irishman Adrian Hill and the British university, he founded Vaccitech six years ago. Hours after the first genetic sequence of the coronavirus was published on January 11, 2020, they began to devise a vaccine. Swedish pharmaceutical AstraZeneca responded to needs to develop production lines around the world.

The Princess of Asturias Awards are intended, according to its regulations, to reward “scientific, technical, cultural, social and humanitarian work carried out by people, institutions, groups of people or institutions in the international arena.” In accordance with these principles, the Princess of Asturias Award for Scientific and Technical Research is awarded to the “work of cultivating and perfecting research, discovery and invention in mathematics, astronomy and astrophysics, physics, chemistry, science life, medical sciences, earth and space sciences and technological sciences, as well as the disciplines corresponding to each of these fields and the techniques related to them ”.

Last year Yves Meyer (France), Ingrid Daubechies (Belgium and USA), Terence Tao (Australia) and Emmanuel Candès (France) were honored for their pioneering and far-reaching contributions to modern theories and techniques of mathematical data and signal processing. . These are the basis and support of the digital age – by allowing graphic files to be compressed with little loss of resolution -, of medical imaging and diagnostics – by allowing accurate images to be reconstructed from a small number of data – and of engineering and scientific research – by eliminating interference and background noise.