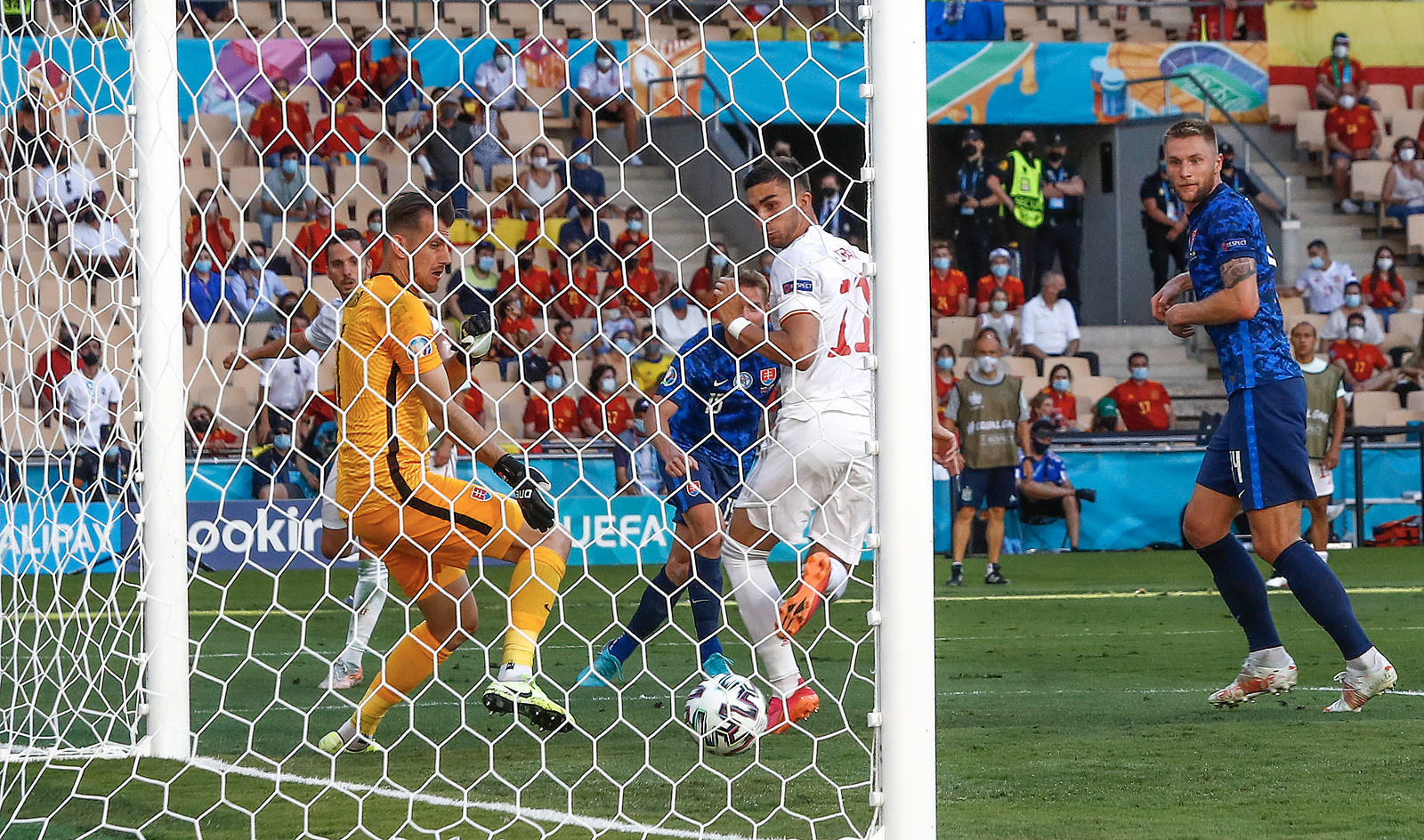 Luis Enrique was prophetic. “Spain is a bottle of cava about to uncork,” he said in the preview. And well he did it in front of the squalid Slovakia team, which he beat in the tureen of La Cartuja, with more than 30 degrees of scourge. La Roja started playing, recreated themselves and even Slovakia was on their side: they conceded a penalty, self-scored twice, allowed Unai Simón a continuous nap and only left a trail of calamities for Seville. The most expansive Spain of the championship, the one synchronized by Busquets and offensively championed by Sarabia, made him pay until he left her in a thong, squeezed like a lemon. La Roja, this time dyed white, ran the risk of being a team destined to be forgotten. Come a crucial day, all together: Present! Second in the group, they will now face Croatia next Monday (Copenhagen, 18.00).

By La Cartuja Busquets parked and changed everything, the luggage and the gloomy landscape of Spain. The captain has the field in his boots. In his head there is a top speed, it is called intuition. Busquets is a seer. He was always an advance in the service of the method. Process the game ahead of time, before anyone else. Against Slovakia, with the Red with the raw nut, he put the team in orbit. From his observatory he gave it hierarchy, depth, pause, vertigo, roll up the sleeves. Enough to shirt the weak Slovak team, limited to the trench, with major errors and without getting within a few kilometers of Unai Simón.

Apart from the support of Busquets, who could not contain the tears after the crash, Luis Enrique introduced three other changes. Azpilicueta exiled Marcos Llorente, Eric García to Pau Torres and Sarabia to Dani Olmo. Another packing, another march. There was no exam for the new defenders, having a snack against the rickety Slovakia. Yes for Sarabia, sharp on both shores, without the shrinkage shown in previous days by Dani Olmo and Ferran.

Photogallery: The images of the match

At the rhythm of Busi, La Roja had another march, little rhetoric. The ball went to the proper space, with more than one forward leak, not that football-handball that Luis Enrique’s team sometimes abuses. Of course, it remained to be measured with the goal, a whole world for this Spain. Fortunately, the holy grail was entrusted to Slovakia itself. First, almost. An inexperience by Hromada led to a penalty awarded to Koke. The referee, perhaps blinded by the Sevillian sun, did not see the Slovakian kick when in his nap with the ball inside the area, the Atlético captain anticipated him. The rescued VAR clarified the irremediable sentence. Morata went from executioner to victim, a role reversal with goalkeeper Dubravka, who deflected the shot.

It was possible to presage a sounded Spain after two consecutive botched penalties. It was not so. Immediately, Sarabia and Pedri did not reach the goal because of a fingernail. Busquets tuned in, the selection of Luis Enrique arrived and Slovakia was increasingly stiff. So much so that when Dubravka was still his only testament to the match, the goalkeeper himself, who was still currently suffering from his stop at Morata, committed a jeremiad. Satka, one of the centrals, preceded him with his particular jaiminada. The center-back wanted to reel the game, he did it with the bunion and Sarabia, who is hit by shrapnel, fired a shot at the squad. The ball flew over the sky of La Cartuja. On her return to earth, Dubravka, with a punch with her right, sent her to her pot. Perhaps the Sevillian sun would dazzle you. Goalkeepers haven’t worn caps for years. Or who knows what caused the terror of the Newcastle goalkeeper.

With his monumental disappointment, Dubravka became the tournament’s top scorer in Spain alongside Morata. The disturbing statistic was broken by Laporte after a poor clearance by Hubocan. Gerard shot from the squad and bevel and the City center-back made bingo with his header. Suddenly an optimistic Spain already at halftime, with two goals ahead, Sweden beating Poland and Slovakia in flip flops from the warm-up, walking through Seville.

Finally, peace for the Red. And a second time for enjoyment, for recreation. Everything to ask of mouth. Slovakia remained as Slovakia, that is, nothing, and every Spaniard who jumped off the bench sang the lotus first time. Sarabia was in charge of the 3-0 after a raid by Alba. In the PSG player there is more than one footballer. Flirting with the goal is going for him, either as an executor or as a producer. Spain does wonderfully who plays with their eyes to the front, not always with low lights.

La Roja was having a great afternoon when the changes arrived to recharge deposits. As it was the day, in La Cartuja everyone lit up. See. A magnificent braid between Pedri and Sarabia ended with a Versailles high heel from Ferran for the 4-0. It was the first ball that the City footballer touched. Pau Torres came out and his header – also in his first intervention – was hit by Kucka. Nobody like Slovakia to remedy the scoring hardships of a team that, uncorking the cava that Luis Enrique said, will have to fly to Denmark to challenge Modric’s Croatia. That will be another story. As football is a weather vane and readers of results abound, the people dismissed Morata with a standing ovation, claimed Traoré and applauded everyone. Also the Slovaks, of course.