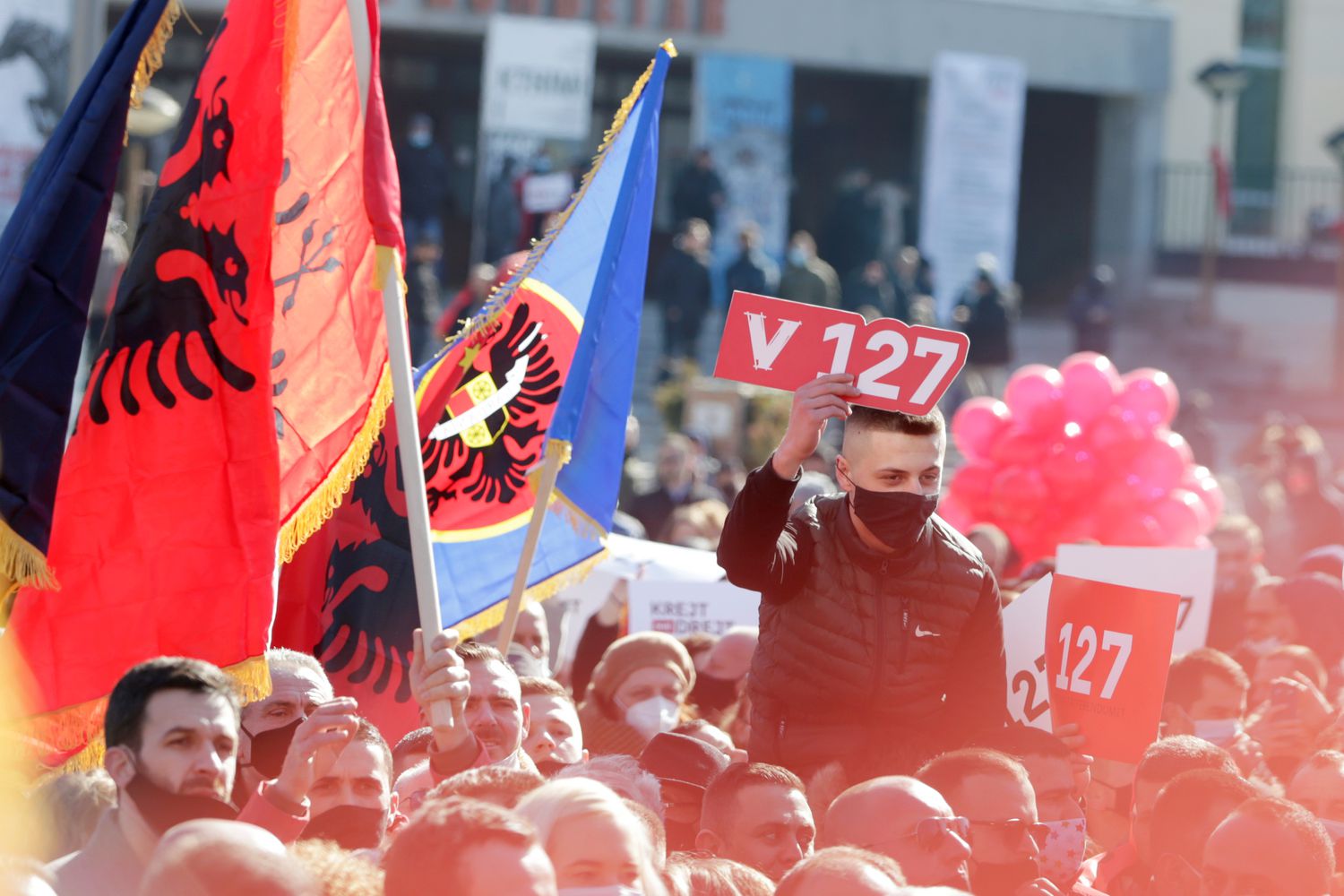 In a Pristina square next to the National Theater, a luminous poster displays grainy images of the guerrillas who fought in the 1990s for splitting from the then-known Federal Republic of Yugoslavia (Serbia and Montenegro). It is an advertisement from the campaign of the Alliance for the Future of Kosovo, the party of Ramush Haradinaj – former prime minister and one of the leaders of that guerilla – ahead of the legislative elections that Kosovo is holding this Sunday.

A few meters away, two young people distribute the Vetevendosje (Self-determination) program to passers-by and many street lamps are decorated with red ribbons in support of this left-wing nationalist party, whose motto (“There is no state with thieves”) strikes a chord in a country of 1.8 million that no longer has to fight for its independence (it declared it in 2008 and some 100 countries recognize it) but corruption remains among its main evils.

In the youngest country in Europe, the first party offers the past, and -according to polls- it runs the risk of being left out of Parliament due to lack of the necessary 5% of votes, while the second speaks of the future and is, therefore, the big favorite in the elections. The polls give him between 45% and 55% of the votes of Kosovar Albanians, which would generate a real political tsunami after two decades of quasi-monopoly of power by the traditional parties that emerged from the guerrillas. Vetevendosje leader Albin Kurti was already prime minister in 2019, but barely 50 days: the time it took him to unravel his coalition agreement and lose a vote of no confidence. If there are elections so soon after, the third in two years, it is by decision of the Constitutional Court after discovering that the decisive vote (61 of 120) to name the one who ended up being prime minister since June, Avdullah Hoti, should not have counted.

In other European countries, young people are relatively few and are inclined to abstain. Here, on the other hand, the average age is 30 years (compared to 44 in Spain) and the group that votes the most is precisely the one between 18 and 24 years old. It is the only country in Europe whose population is growing (there are 50,000 new adults – and, therefore, potential voters – compared to a year and a half ago). And that 170,000 people, mostly young people, emigrated between 2015 and 2019, especially to Germany and Switzerland, in search of the opportunities denied them by a poor economy (the third with the lowest GDP per capita on the continent), with 54 % of youth unemployment and high doses of corruption. Almost a third of the 2.6 million Kosovars live abroad and their remittances account for 15% of the country’s GDP.

A recent poll indicates that 65% of those under 25 will vote for Vetevendosje this Sunday. It is not difficult to find in the streets those who will mark the box of this party on the ballot, born in 2005 from a socio-political movement and whose program focuses on the fight against unemployment, corruption, clientelistic networks, nepotism, crime organized … Evils that he attributes, with a more or less thick line, to the “old guard”. A speech that connects with the feeling that, 47 years after achieving remarkable autonomy within the then Yugoslavia, 22 after a war and 13 after declaring its partially recognized independence, Kosovo today has remained in a kind of souffle that does not just go up.

This is the case of Ardian Krasniqi. He is 24 years old, studies law and sells roasted chestnuts at a street stall while the thermometers read seven degrees below zero. “In a normal country I wouldn’t be here right now,” he laments, almost shivering. Both he and the two friends who accompany him will vote for Vetevendosje. “I have thought about leaving. Normal, everyone thinks about progressing in life. But it is difficult to get out, they are dangerous routes. If nothing changes this Sunday, maybe it will, ”he adds as his friends hang their heads. “I’m going to vote for them just to change,” says one of them, Benart Hyseni, of the same age and a Computer Science student at a private university. “Simply so that there is something different from what there has been in these 20 years. The politicians that have existed up to now have their merit for having brought us here, for what they did in the guerrillas… but we cannot be proud of what they have done afterwards ”.

Elvira Thaqi begins by saying with an apologetic smile that both she and the friend she has tea with in a cafe-bookstore in the center of Pristina are artists and pass from politics. That is why, at 23, he has always abstained. But this Sunday it won’t. “I have never voted until now because I felt it was useless, but this is going to be the first time I have, and I will do it for Albin Kurti [líder de Vetevendosje], for there to be a change ”.

Although this time it is at the polls, it is not the first time that youth have piloted change in Kosovo. In 1997, the University of Pristina was the germ of the protest movement against Slobodan Milosevic. And it was young people who led the armed struggle in the mountains of northern Kosovo.

Change is, in fact, the word that sounds in many mouths of those who have little to come of age. Sometimes with enthusiasm; others, almost with resignation. “Vetevendosje is the best within the bad. I have no choice because I do not want to waste my vote and I am tired of listening to the old parties, which are stopped in the past. And sick of people leaving. I have no plans to do it and it even seems wrong to me that so many do it, instead of staying and trying to change the country, ”says Fisnik, a 20-year-old dental student from the historic city of Prizren.

Last May, the barometer of the US National Democratic Institute reflected the concerns of the Kosovars. The top four are unemployment (84%), corruption (53%), the pandemic (48%) and the lack of visa liberalization (35%). The latter, so that Kosovo is the only European territory whose citizens cannot travel to the EU without first applying for a visa, is one of the elements that generates the most frustration. On the other hand, the topics that dominate the news headlines abroad, such as the dialogue with Serbia or the recognition of Kosovo, remained very low on the barometer and did not appear in the conversation until asked about them. “It’s not a priority,” admits Anita Bytyci, 21, outside a fast food restaurant. “We cannot change the reality with Serbia in the short term either. We like each other and that’s it ”.

In principle, the foreseeable victory of Vetevendosje will complicate the dialogue with Serbia. The issue is not even on the party’s program despite being fundamental to both. That Belgrade agrees to recognize its former province would unlock its eventual entry into the EU (it is in negotiations, but in practice the agreement is a sine qua non for entry) and would open the doors of the UN and full recognition to Kosovo. Kurti has historically maintained a very harsh speech against dialogue with Belgrade, with clearly unfulfilled preconditions. In addition, he led the demonstrations against the pact that increased the autonomy of the Kosovar provinces with a Serb majority. In recent years, in parallel to the rise of his party, he has been softening it and avoiding addressing the issue.

Emma, ​​19 years old and who has not yet decided her vote, is another example that, in a country with 18% poor people and a minimum wage of 130 euros up to 34 years, the daily concerns are not the negotiations with Belgrade . She works in a clothing store while studying Social Work. “I go to public university, but I am not from Pristina and my family is seven members and they cannot afford to pay me rent, electricity and water,” she says on a pedestrian street downtown. Share a room with a friend in a house with more people. It is for what they give him the 230 euros per month that he earns for a full day. And without much prospect of improvement: the pandemic has shrunk GDP by 9% and the growth forecast for this year is less than 4%, according to World Bank forecasts.

They are the realities of those Kosovar Albanians who have not experienced – or were so small that they barely remember it – the Serbian repression, nor the 78 days of NATO bombings in 1999 that forced the withdrawal of the Serbian militias and the Yugoslav Army in fear. of a new genocide on the continent, just four years after Srebrenica. They have grown up in a time when Hashim Thaci, for example, is not only the ex-guerrilla who fought for independence, but the object of jokes for his perennial connection to power. He served as president until his resignation last November, when the Special Court for Kosovo – established by international pressure to try crimes committed during and just after the Kosovo war, between 1998 and 2000, and technically part of the Kosovar judicial system, although based in The Hague – confirmed his indictment for war crimes and crimes against humanity.

“This Sunday the vote will be more against the old policy than in favor of Vetevendosje,” explains Agron Demi, an analyst of socio-economic affairs at the GAP Institute, in a cafeteria in Pristina. think-tank based in the capital specialized in governance and transparency matters. “Rather than asking ourselves what has changed in Kosovo to reach this situation, we should look at the opposite: what has not changed. Unemployment and poverty rates are more or less the same as when independence was declared, visa liberalization has not been achieved, recognition has stalled or even declined, and dialogue with Serbia is at a standstill. The rest of the new political parties that appeared in recent years were very weak, barely lasting an election. Vetevendosje is the only alternative that has not yet been tested ”.

And that some young people don’t want to try either. Nazim Elshani, a 24-year-old computer engineer, will support Nisma this Sunday, a social democratic party with a lot of prestige in his hometown, Malisevo, and which polls predict around 3% of the votes, which would exclude him from Parliament. “They have experience and they are the ones who have done the best when they have been part of the Government. Vetevendosje has never governed, and talks all the time that there is a lot of influence peddling, but I did my job by myself. Or Diella, a 20-year-old student in the Czech Republic who spends a few days in her hometown and who hesitates between staying home on Sunday, “marking a big cross on the ballot” or voting “to annoy” one of the parties representing minorities, who are guaranteed 20 of the 120 seats in Parliament: “Here people with studies but no contacts have just babysitter or waiter. The problems of this country are not solved in four years. And if you win, Vetevendosje will just plug theirs in. I do not trust”.