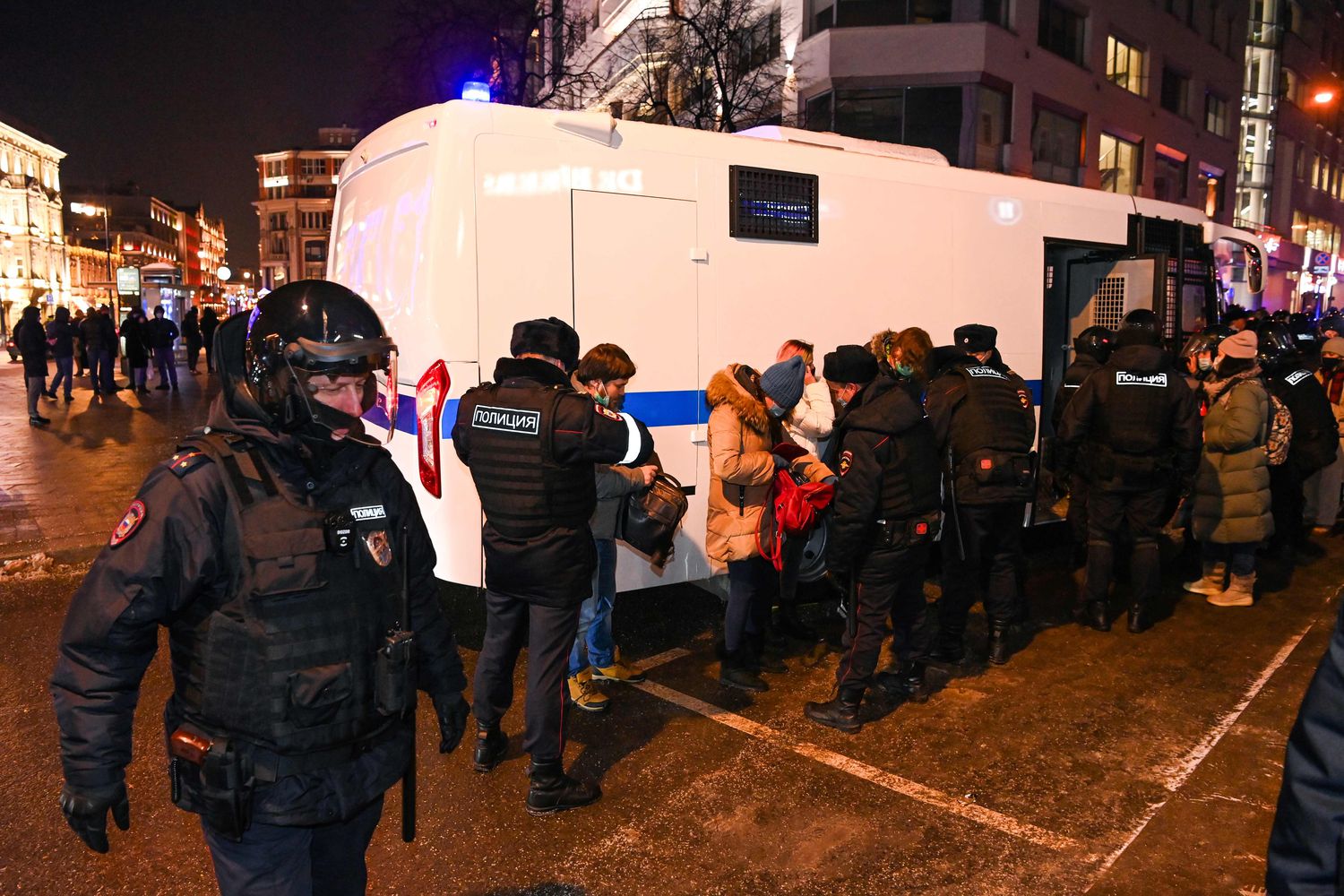 A cell for eight people occupied by 28 inmates, so close together that they have to take turns sleeping. Beds without mattresses. Useless bathrooms. With thousands detained in protests in support of opposition Alexei Navalni in recent weeks, Moscow’s temporary detention centers are full. The saturation is such that some of those arrested have remained in police vans for hours, sometimes overnight, waiting their turn to unload. Several detainees, their families and civil rights organizations denounce overcrowded conditions, poor care and health risk in the middle of the coronavirus pandemic. The images of the interior of the centers and the vans have caused great indignation in the Russian independent media, but the Interior Ministry assures that everything has been “taken out of context”.

Masha Ugolkova spent the entire night and part of Wednesday morning in a police van, surrounded by people and with the ground wet. “We can only fit all of us if someone is standing. This is impossible, ”he said in Twitter messages. She was arrested on Tuesday, when she was protesting with a group of friends in central Moscow over the conviction of Navalni, who will have to serve two years and eight months in prison for violating the probation she has been on since 2014, when she was sentenced. for fraud in a controversial case that was declared “arbitrary and unfair” by the European Court of Human Rights. This court ruled that the opponent should be compensated.

“There came a time when it was desperate. We began to sing inside the van so as not to go crazy, “said activist Ugolkova. Not long after, he posted a message on his social networks: “We are in Sajárovo, they are taking our phones away.”

There are more than 11,000 detainees throughout Russia since the massive march on January 23 to demand the freedom of the opponent, arrested just after returning to Moscow from Germany, where he traveled to deal with the poison attack suffered this summer in Siberia. And another 4,600 in the Russian capital, according to the organization Ovd-Info, which monitors the situation in detention centers and provides legal assistance to those arrested.

That, explains lawyer Ilya Novikov, who has worked on numerous human rights cases, has caused them to exceed their capacity and begin to transfer people, for example, to migrant detention centers. Like the one in Sajárovo, in the Moscow region, whose images have brought out its terrible conditions. “There are three times more people than beds, we are seeing that they have had to sleep sitting or leaning against each other using pillow coats.”

Egor Hlopovskiy, 21, was arrested on January 23, in the first massive protest in support of Navalni. He says he was near the jail where the opponent is being held when they pushed him on the snow and arrested him. Since then, he has gone from police station to station, to the court that sentenced him to 10 days of administrative arrest and several centers, all of them saturated. Until finishing, like Ugolkova, in Sajárovo. This Thursday just came out. He says that his cell was not saturated, but that it was far from complying with sanitary standards. “They gave us food and a cup of water per person three times a day. They did not give us hygiene products and the cells were extremely hot. It was impossible to be there and we have even seen bedbugs, ”Hlopovskiy says by phone. He is a shop assistant, but he is sure that as soon as he returns he will be fired for participating in the protests. He has no regrets: “I went out to the demonstration because I have lived with Putin all my life and I don’t see any change. Justice, which must be independent and in Russia belongs to the State ”.

In Sajárovo there is also Sergei Smirnov, director of the medium online Independent MediaZone, arrested while walking with his five-year-old son on the street, accused of inciting protests. Smirnov had not even been there. He only retweeted a joke about the mobilizations. He will have to serve 25 days of administrative arrest in yet another case that symbolizes the repression of social mobilizations and independent media. The images that the journalist sent to his wife, who posted them on social networks, show a cell overflowing with a ramshackle appearance, with a series of bunk beds without mattresses in which two or three men crowd each one.

The photographs that Smirnov took and his case —which has elicited the solidarity of other media, including the largest business newspapers, towards Mediazone– founded by the Pussy Riot movement and focused on human rights and criminal justice – have drawn harsh criticism. Not only because of the conditions of the detainees, but because of the irony that Navalni’s allies are being sentenced to house arrest for violating the sanitary regulations of the pandemic during the protests and, later, the authorities crowd them in the corridors of the police stations and in centers without conditions without worrying about the health crisis.

All this has provoked a response from the authorities, who this Thursday have begun to try to distribute to the inmates. And they even gave them grooming supplies, Tatiana, Smirnov’s wife, wrote on her Telegram channel. However, they also took away mobile phones from most of those who still had them. At the gates of Sajárovo, a hundred family members were waiting this Thursday at noon to deliver food and health products to their relatives.

Faced with criticism, Kremlin spokesman Dmitri Peskov has blamed the detainees for saturating the system. “The number of arrests is greater than detention centers can handle, greater than could be quickly processed. This situation was not caused by the forces of order, but by the participants in the unauthorized demonstrations ”, he concluded.

On the eve of the meeting of the High Representative for Foreign Policy of the European Union, Josep Borrell, with Russian Foreign Minister Sergey Lavrov, Peskov stressed that Russia would not listen to Western criticism of the Navalni condemnation or the repression of the protests , which have not stopped happening. He also assured that, if Borrell had requested to visit Navalni, it would only be up to the prison authorities and the courts to consider the request.

With their leader behind bars and their main allies held in solitary confinement, Navalni’s supporters seek his site and analyze his perspectives. Meanwhile, the approval rating among young people for Russian President Vladimir Putin has plummeted. 46% of those surveyed between 18 and 24 years of age have declared that they do not approve of Putin and his management, according to a January poll by the Levada Center, the only independent in the country. In January 2018, only 18% of that age group claimed to suspend the Russian leader, who has an overall popularity of 63%, according to the poll; a high figure by Western standards, but his lowest mark since he came to power more than two decades ago.

Putin began losing support among the youngest, who accumulated discontent, due to the pandemic. To that, Denis Volkov, deputy director of Levada, explains the outrage over Navalni’s arrest and his report on Putin’s alleged billionaire palace. The YouTube video, which has 100 million views, has been viewed by 3.4 million people in Russia in its entirety. Although it has been the memes and alternative videos generated that have ended up making it viral.

Kiwis are my slavery —…