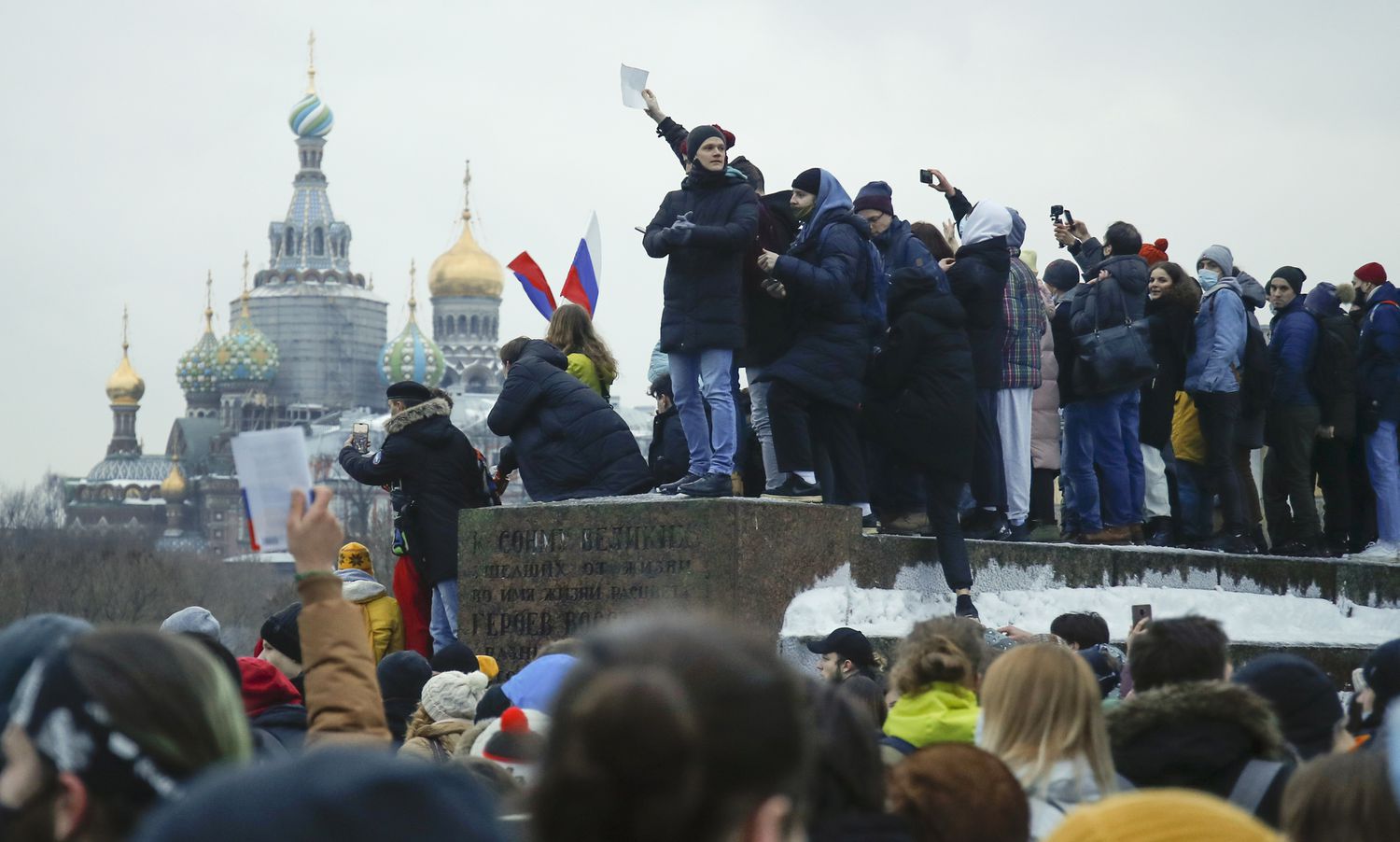 Manicurist Katerina Grigorieva had never attended a protest. A week ago, she put on tights under her jeans, bundled up her down coat and went out to protest at minus 10 degrees in the industrial city of Izhevsk to support Alexei Navalni. In front of the regional government building, surrounded by the traditional ice statues of each winter, he joined hundreds of people who demanded the freedom of the Russian opponent. Grigorieva is not interested in politics, she says. And he confesses that he has never voted. But although until a few months ago he did not pay much attention to Navalni, he would consider doing it for the activist, arrested two weeks ago as soon as he returned to Russia from Germany, where he recovered from the serious poisoning suffered in summer in Siberia. “The situation in Russia with the economy and corruption is unbearable. And the guy not only doesn’t mince words about it, but he has come back after they tried to kill him, ”this 24-year-old woman says by phone.

The Navalni case, which sees the hand of Russian President Vladimir Putin after his poisoning, has unleashed the most important mobilizations against the Kremlin in the last decade. And these threaten to become a movement of even greater indignation, driven by citizen discontent, falling living standards and unrest over social repression. With a real opposition that has no political representation (except for local cases), atomized and diverse, the main concern for Vladimir Putin and the Government is whether Alexéi Navalni, 44, who has become the most visible and popular critic against the Russian president, could manage to unify it.

Although in a country in which the authorities continually veto critics of the Kremlin from the elections “you cannot speak of an opposition in the same terms as in electoral democracies,” points out the eminent political scientist Ekaterina Schulmann. For her, therefore, with a “non-existent” real opposition, the question is whether Navalni could become a leader and symbol of the mobilizations and transform what is happening into a powerful and lasting protest movement throughout the country. However, it is too early to make predictions, he remarks.

And Putin, whose approval ratings have fallen of late, has resisted other onslaught. Navalni has gained popularity in recent years for his reports on Russian political and economic corruption and thanks to his permanent presence on social media. However, polls by the Levada center, Russia’s only independent center, give him 20% support compared to 60% for the Russian president in a recent poll, before he returned from Germany. Despite the “filters in the minds of the citizens” towards the prominent opponent, invisible to the powerful Russian state media and accused by the Kremlin of being a foreign agent who wants to destabilize the country, the valuation of Navani is increasing, analyzes Denis Volkov , deputy director of Levada.

The demonstrations in support of Navalni have brought together a heterogeneous group, with no common political ideology. From urban liberals to nationalists, libertarians or Trotskyists; also to feminists, who until recently had no connection with the prominent Russian opponent, who traditionally connects better with the male public, according to their data. But Anastasia Glushkova, an activist for women’s rights, shouted like the most in the Moscow protest along with her companions. There, amid the cries of “Putin, thief” or “freedom for Navalni”, he met the environmentalist Arshak Makichián. In the capital, for almost 40% of the attendees, last Saturday was their first protest. In that demonstration, which resulted in more than 1,500 detainees (more than 4,000 throughout the country), 42% were women, according to a survey carried out by a group of sociologists and anthropologists.

Navalni has thus managed to gather a diverse swarm to which they have joined even more disenchanted motivated by his latest investigation into Putin’s heritage, in which he describes him as the true owner of a luxurious palace on the Black Sea.

The opponent is achieving a certain union, not so much because of his political opinions – the opponent is openly nationalist, and years ago he attended the far-right marches in Moscow, although he has started to embrace more liberal positions – but because he is perceived as a symbol of anger against the Kremlin and against injustice, says Abbas Galiamov, political adviser and former speechwriter for the government. “Navalni has eclipsed all other dissenters or critics. That, together with the repression of the authorities on the opposition and authoritarianism and the pressure suffered by citizens, is making the point happen to be that if you do not like Putin you are, automatically, a supporter of Navalni “, Galiamov thinks.

This is also believed by Anton Sidorenko, from the city of Nizhny Novgorod (western Russia), an activist for LGTBI rights in a country in which homophobia is a State policy and it is penalized to disseminate materials on “non-traditional” relationships that may reach minors. Sidorenko, 33, affirms that the current situation “has completely erased” those ideological lines, which in Russia were already extremely blurred. United Russia (in the Government) is a conservative party with nationalist positions, for example, like many other political formations. “Now it’s about going out into the streets and uniting against a criminal autocracy,” says Sidorenko in a video call from a trendy cafe in downtown Nizhni. The activist also believes that Navalni has given some hope for change. And that, he says, “is extremely important.”

Nikolai Ribakov, president of the historic liberal Yabloko party, on the other hand, is not optimistic. “The opposition has made numerous attempts at unification in recent years, but nothing substantial has been achieved due to the divergence in views and concepts of the political struggle. And the current situation will not dissipate that, ”he says. The liberal politician describes Navalni as a “person of hype“, That is, someone who arouses expectations, emotion, but” not ideology or values. ” “What is happening in Russia is outrageous for people of different political ideologies and even for those who had not even articulated their views. For many it is not politics, but civic activism “, says Ribakov, who believes that the mobilizations are” an emotional outburst without a political agenda in a tired country. ” And all seasoned with the prospect that Putin, who has been in power for more than two decades and who changed the Constitution last year in order to perpetuate himself, could continue to sit in the Kremlin chair until 2036.

The case of Navalni, who is accused of violating, while he was in Germany, the conditional release imposed on him by another controversial sentence six years ago, has fueled the anger of a citizenry who is truly exhausted with the economic – very much in need of reform – and social situation From Russia. The list of problems is long: inflation has risen, the ruble fell by 20% last year, and the population’s real incomes have fallen by 10% since 2014. Poverty levels, which had been exacerbated by the price decline of hydrocarbons, have risen even more during the coronavirus pandemic. Also the isolation and the events of the health crisis, warns the political scientist Schulmann, have “filled the closed container with social energy”.

The mobilizations for the freedom of Navalni are scheduled to continue this Sunday. The authorities are maneuvering unbridled to turn them off and, with Navalni in prison, to remove his main collaborators from the streets and networks, detained and under house arrest since Friday. This latest wave of repression, together with the threat of severe penalties for participating in prohibited demonstrations, could dissuade citizens. However, it can also further aggravate the population.

The timing of the protests is key, says the president of the liberal Yabloko party, Nikolai Ribakov. The politician foresees an even more intense wave of repression now against opposition parties like his or independent candidates in the run-up to the legislative elections scheduled for September. Elections in which Navalni’s allies are almost certain that they will have the traditional veto of the authorities.

The mobilizations are important, highlights the political scientist Ekaterina Schulmann, a professor at the Moscow School of Social and Economic Sciences (MSSES), because they will affect the course and outcome of the campaign and the elections and the composition of the future Parliament. The protest vote can be significant.

And during election time, argues political adviser Abbas Galiamov, is when dissatisfied people, but who are not normally interested in politics, look for political alternatives. And there may have an impact on Alexei Navalni’s smart vote initiative, which analyzes which candidate has the best chance against United Russia and proposes to support him, and which has already garnered symbolic victories in Siberian cities.

With the example of Belarus, where protests for democracy and against Aleksandr Lukashenko, an ally of Putin, have continued since the summer, the Kremlin has already rearmed itself, passing last December a package of measures that further limited the ability of opponents, the right to demonstrate and stiffened fines. His recipe remains the same: isolate opponents, silence them and resist the onslaught of his critics with propaganda measures, economic initiatives to support families and relying on the extensive security apparatus. That could go on for a long time, activist Anton Sidorenko believes; until the discontent is so great that “it is impossible to stay at home.”