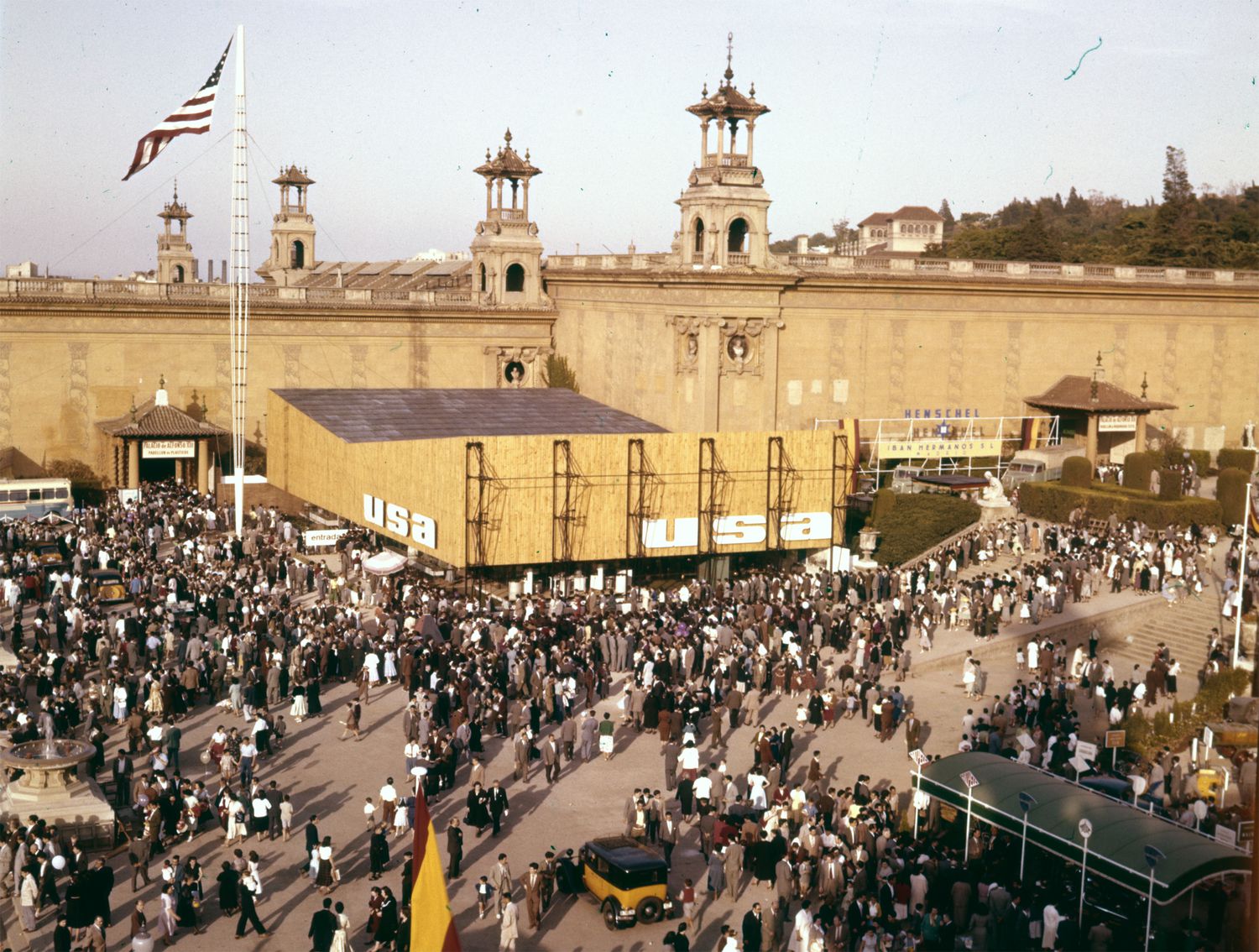 People who visited the Barcelona Trade Fair in June 1956 were stunned to see a huge United States flag flying 30 meters high and visible from many parts of the city. It marked the place where the American pavilion was located, made with a Mecanotube structure and a wood and glass facade that contrasted with the historicist palaces that Puig i Cadafalch built for the 1929 International Exposition. Inside, among huge photographs of the Statue of the Libertad and the Brooklyn Bridge, raw materials were exposed until recently scarce in Spain such as milk, flour, rice, cotton and tobacco and its spectacular process of transformation into ice cream, donuts, cakes and Bisonte cigarettes that were distributed free to visitors, in addition to appliance demonstrations and fashion shows. All with air conditioning. So much magic caused long queues to enter, which can be seen in one of the more than 8,000 photographs, 200 plans, graphics and texts related to the Marshall Plan that are kept in the College of Architects of Catalonia (COAC). They are in the process of digitization to be able to expose them. In November, 30 plans and photographs of this documentation will be part of the section launched by the Reina Sofía museum on architecture.

The presence of the American pavilion in Barcelona was the result of the new air of the Franco regime opening up to the world after years of fierce dictatorship: In 1951 the United States and British ambassadors returned to Spain; in 1953 the economic aid agreements with the United States were signed and in 1955 Spain joined the United Nations. An openness that allowed the country, until now excluded, to benefit from the Marshall Plan launched by the United States in 1948 to modernize and rebuild Europe after the crisis generated by World War II. The director Luis García Berlanga reflected very well in 1953 in Welcome Mister Marshall the hope of progress that these US aid generated in Spain.

The Marshall Plan, endowed with 13 trillion dollars, granted Europeans low-interest loans, non-refundable aid and advantageous trade agreements, with the idea of ​​stimulating production, giving way to American industry and keeping the Communist threat at bay. To spread the benefits of the plan, an office installed first in Berlin and then in Paris was created, directed by the American architect Peter Harnden who surrounded himself with a team of illustrators, designers and architects, such as his right hand, Lanfranco Bombelli. Together they launched a dozen exhibitions that were seen in 400 European locations.

In November, the Reina Sofía will exhibit 30 of these photographs and plans in its architecture section

“In 1950 the first exhibition, Europe builds, toured France, Belgium, Holland, Denmark, Sweden, Germany and Italy. Four extendable trailers carried the contents of the exhibition inside: illustrations, mobile models, panels and three-dimensional graphics, which during the exhibition were displayed in a circular circus tent erected after the arrival of the convoy. In 1952, Caravan of peace It starts in Naples with the aim of explaining the origin and necessity of NATO. In Train of Europe, an old German military hospital train was used to explain the advantages of cooperation between countries. Another on the Productivity it was mounted on two barges, one as an exhibition hall and the other as a cinema, to tour the Dutch canals. “They are didactic exhibitions, with a clearly very great political utility, in which the United States claims to be the New World that has saved the Old World,” explains Julio Garnica, an architect who has studied and cataloged this collection.

“Although the Marshall Plan had technically ended on December 31, 1951, its informative program and its spirit continued in the hands of Harnden and Bombelli, explaining the same, but with variations. Even when the United States government terminated their contracts in late 1955, they continued to receive assignments as freelancers; not only from the State Department, but from the Department of Commerce, with the intention of promoting business and penetrating the European market, including then Spanish cities as potential markets “, explains Garnica, who is also a professor of History of Architecture at the Barcelona School of Architecture of the UPC.

“There are two clearly differentiated stages, the first in which the idea is to rebuild and move Europe forward after World War II and the second in which Harnden and Bombelli work to capture new markets for American industry and commerce. If the Marshall Plan is more political, as of 1955 it is a more commercial issue, where the advantages of the American product, the modernization of production and the American way of life are sold, ”says Fernando Marzá, head of the COAC archive and of the digitization of this fund.

Like the pavilion commissioned by the US Department of Agriculture for the 1956 Barcelona Fair, which made such an impact on visitors to this city, which was raised again in 1957 and another, in 1959, at the Madrid International Countryside Fair, where they project a metallic structure that also amazed all Madrid visitors. “Some buildings in which they show the language of modern architecture that, without a doubt, influenced the Spanish architects who took note of the advantages of dry assembly and the efficiency of the assembly of prefabricated pieces and the possibilities of advertising”, he explains Garnica. “They were better graphic artists and communicators than architects, and they used architecture as communication,” says Marzá.

And how did this material get to the COAC? Harnden and Bombelli met the architect José Antonio Coderch at the Milan Triennale in 1951, who invited them to visit Cadaqués, “the only beautiful town left in Spain,” he told them. After a first stay by Bombelli in 1956 and Harnden in 1957, in 1959 they bought Villa Gloria as a summer residence and move their office to Barcelona from where they organize the U.S. Trade CenterBusiness and export promotion centers that open in cities such as Frankfurt, Paris, Stockholm and Milan, alternating with the construction of houses in Cadaqués and Spain for their select group of friends. “In 1971 Harnden passed away and in 2002 his heirs and Bombelli ceded their joint work carried out between 1955 and 1971 to the COAC archive. In the end, the conqueror was conquered ”, concludes Garnica.