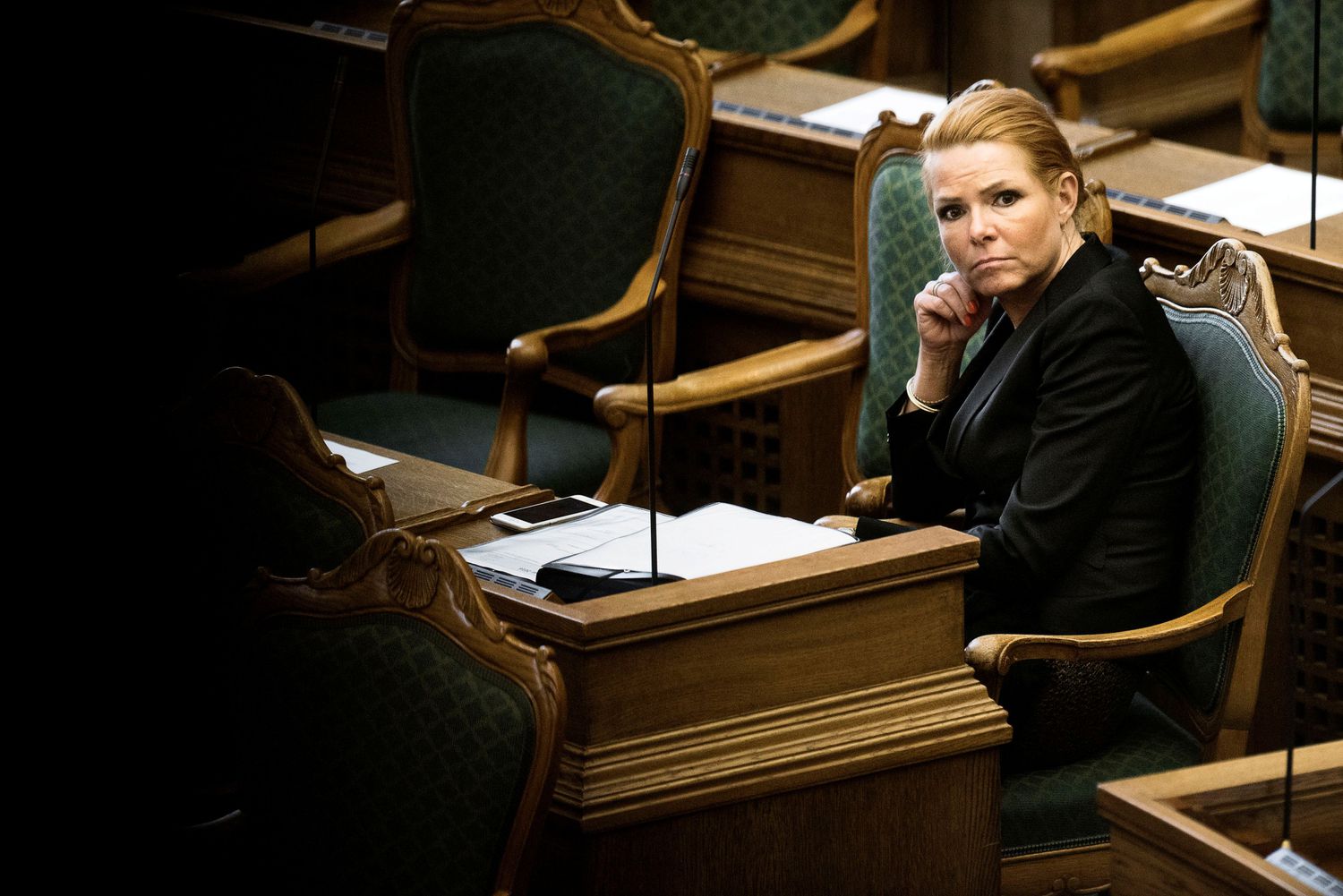 The iron hand in Danish immigration policy sits on the bench. A few hours after the world witnessed the American decision to submit a second impeachment a Donald Trump, el Folketing (Parliament) was signaling to activate its own process of political rejection, popularized in Denmark with the English term. In this case, the procedure does not affect an active leader, but the former Minister of Integration, Inger Stojberg, 47, for having illegally separated several couples of young migrants who in 2016, in the middle of the refugee crisis in Europe, they were seeking asylum in the Scandinavian country of nearly six million people. Stojberg, known inside and outside Denmark for her heavy hand on immigration, thus becomes the first policy on which a impeachment since 1995, and the sixth in the country’s history. It is a “historic” decision, experts agree.

Stojberg, who held the Integration portfolio between 2015 and 2019 and is today a deputy of the main opposition party (Venstre, Liberals), is accused of having separated at least 22 young migrant couples despite the fact that legal and numerous lawyers advised against it because it did not mediate an ad hoc investigation and it lacked a legal basis. The former minister alleged at the time that she made the decision to separate, as long as the woman was under 18 years of age, to prevent them from being forced into marriage, something prohibited in Denmark.

This Thursday, after knowing the judicial future that awaits him by announcing at least 113 deputies (out of 179) who will vote in favor of the impeachment the next month, Stojberg again defended himself in an eloquent comment on your facebook page to a story published by the public network DR about a forced marriage between a 14-year-old teenager and her 28-year-old cousin. “My stomach hurts and I get sad when I read this. A girl marries her cousin (…) I really hope that all foreign ministers, regardless of party color, will intervene. I could not forgive myself if my intervention in 2016 had been a failure [en referencia a las separaciones de parejas jóvenes]. Girl-brides are a terrible phenomenon and I will do, as I would have done then, everything I can, within the law, to protect girls, ”he wrote.

The problem does not come from the separation of migrant couples per se, but from the fact that there was no legal basis to do so, says Kasper Moller Hansen, professor of political science at the University of Copenhagen, by phone. “If the mistake had been apologized or acknowledged at the time, the impeachment it would not have happened. We would not be in this situation. The problem is that she continues to firmly believe that she has done nothing wrong, ”he continues. And an example is the resignation last November of the Minister of Agriculture, Mogens Jensen, due to the scandal of the slaughter of 17 million minks (without legal basis or debate in Parliament) as a measure to stop a variant of the coronavirus. “He apologized, accepted his mistake and resigned,” argues Moller Hansen.

The long process of impeachment, which in Denmark can be activated exclusively by the Folketing or the Crown, had been studied since 2017, when the Danish Ombudsman criticized the separation of couples as a result of the complaint of one of these. But the Social Democratic government of Prime Minister Mette Frederiksen and Stojberg’s own fellow party ranks, with whom the relationship worsened in December because they forced her to leave the vice presidency of the formation, have ended up delivering the coup de grace. “Based on clear legal assessments, the Social Democratic parliamentary group has chosen to agree that the Folketing start a national court case, ”Frederiksen announced in a statement Thursday. “He Folketing has been clear: ‘We need to apply the law. No minister is above it ”, illustrates the political scientist in a telephone conversation.

Experts point to next summer as the date on which the process will formally begin. He will be tried by a special court of the Supreme Court created in 1849 for illegitimate acts of ministers, and which has been activated only five times in the history of Denmark: three in the 19th century and two in the 20th century. The last time was in 1995, when Erik Ninn-Hansen, a former Minister of Justice, was given a four-month suspended prison sentence for his responsibility in banning the entry of Tamil refugees from Sri Lanka.

The former minister will now face a long judicial path —probably more than a year— and very “complex,” says Mikael Rask Madsen, professor of law at the University of Copenhagen, which would be a hybrid between a political trial such as the one currently taking place is seeing in the United States against Trump and a legal trial to use in which, however, the Folketing acts as a prosecutor. “Anyway, the political aspect is there,” he emphasizes.

This court consists of a maximum of 15 Supreme Court justices and an equal number of persons appointed by Parliament. These are not deputies, but “generally ex-politicians who act independently” and who bring their professional experience. “They do not act as politicians, but as lay judges with experience in politics”, clarifies the professor.

Controversy has always accompanied the name of Inger Stojberg who, if found guilty, could face anything from a prison sentence to a financial fine or acquittal. “[Ella] She has represented a hard line on immigration issues and also advocated pushing international conventions to the limit when she was Minister of Integration ”, explains Rask Madsen through an email.

She was the one who devised the law that obliged the authorities to seize the personal belongings – including jewelery – of the refugees in order to pay for their living expenses; the one that orchestrated a media campaign against Lebanese immigration; the one that put the so-called “ghettos” on target; the one that wanted to exile the migrants who were going to be deported to an island in the Baltic; even the one that celebrated its 50th anti-immigration law blowing out candles of a cake, a picture that was posted on social networks, fueling the migratory row that has prevailed in the EU during the last five years. Former Prime Minister Lars Lokke Rasmussen, who headed the Executive of which Stojberg was a part and who now declares himself independent, has nevertheless been exonerated.

Only the ultra-right votes against starting the process

Of the 41 deputies who have the liberal party of Stojberg (Venstre), 32 have voted in favor of him sitting on the bench of the Supreme Court and nine against. The other parties with representation in the Folketing also declare themselves in favor, with the exception of a handful of deputies who ask for more conclusive proof that they actually acted without legal basis, regardless of whether they were against or in favor of their immigration policies. The extreme right of the Danish People’s Party and those of the – even more to the right – Nye Borgerlige (The New Right) are not only against initiating the ‘impeachment’ process, but are now trying to woo what was perhaps a of the toughest European policies against immigration in those troubled years.

But in Denmark, far from criticizing a polarizing migration policy that at the time generated a lot of controversy both in Copenhagen and in Brussels, analysts now point to the debate that has been opened around respect for the rule of law – which is what is going to judge – and respect for the laws and customs of the Scandinavian country. “It presents a huge dilemma because it is clear that you cannot do something illegal, but you cannot allow this type of forced marriages in Denmark either. Here it is also not allowed to have more than one wife, ”illustrates political scientist Kasper Moller Hansen of the University of Copenhagen.

Organizations such as the Danish Council for Refugees, the Danish Institute for Human Rights and the UN refugee agency (UNHCR) have refused to comment on anything related to the ‘impeachment’ of the former minister.

Behind the Dordogne’s right turn…