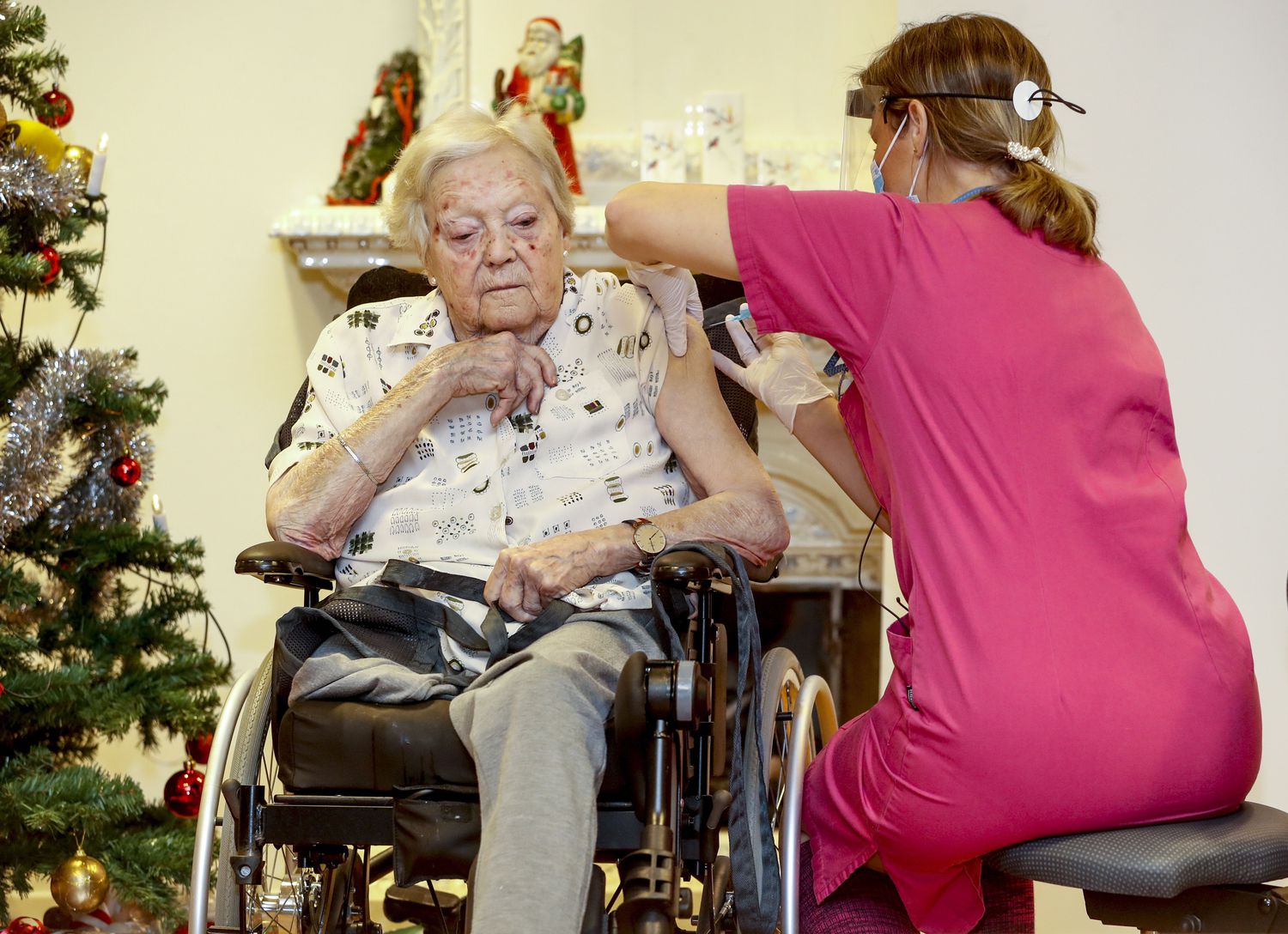 Europeanism in vein. The European Union this Sunday began vaccination campaigns against covid-19, an unprecedented health and logistics operation that aspires to become the symbol of the EU’s joint and supportive response to the largest pandemic in 100 years. Simultaneously and from the factory in the Belgian town of Puurs, the doses of the vaccine developed by the German pharmaceutical company BioNTech and the American Pfizer have reached all corners of the continent at the same time thanks to the mediation of the European Commission, which has negotiated the same price and distribution conditions for all EU states.

Each country has chosen the place for the first vaccine injection, from the La Mancha capital of Guadalajara in Spain to Seine-Saint-Denis (on the outskirts of Paris) in France or Rome in Italy. In most places, the elderly and health personnel have starred in the symbolic premiere after 10 months in which the disease has been especially deadly in nursing homes and has forced employees of the hospital to work until exhaustion. health sector. In almost all countries, women have been responsible for administering the first dose and for volunteers to receive it.

“Today is a day full of emotion for all of us,” says the European Health Commissioner, Stella Kyriakides, in statements to EL PAÍS. “Seeing the start of vaccination in all Member States, small and large, is a great moment of EU solidarity in action.” Brussels is confident that the immunizer marks the beginning of the end of an epidemic that in 2020 has claimed more than 400,000 lives in Europe and sunk more than 14% of the EU’s gross domestic product during the second quarter of the year (compared to with the same quarter in 2019).

“Finally, we see light, and life at the end of the tunnel,” celebrates Dr. Hans Kluge, director for Europe of the World Health Organization (WHO) in statements to this newspaper. Kluge recalls that “while the vaccination campaigns are being developed, we need to tighten security measures, such as physical distance, avoid crowds, use the mask outside our family bubble or wash our hands”

The campaign started during a day with unpleasant weather in much of Europe and with strong winds on the western flank, such as France or Belgium, caused by the Bella storm. But the distribution of the doses carried out during the previous days has gone smoothly despite the complexity of the logistics operation.

Under continuous police protection, to avoid assaults, the vials have been transported in containers with controlled temperature (between -80º C and -60º C) based on dry ice, with storage capacity for 10 days. Once the boxes are opened in the vaccination centers, they can be kept in freezers at that temperature for another six months. Since they are defrosted, they can last in a conventional refrigerator for five more days.

At 7.30 in the morning, two Italian sanitarians premiered the product at the Spallanzani National Institute of Infectious Diseases in Rome. At 9:05 am, the vaccine was administered to Araceli Hidalgo, 96, at the Los Olmos public residence in Guadalajara, and in the same place, minutes later, to the nursing assistant Mónica Tapias. Around 11.00 a.m. Mauricette, a 78-year-old former domestic worker in the long-term care unit for the elderly at the René-Muret de Servant hospital, in Seine-Saint-Denis, on the outskirts of Paris, received the injection. of the French departments hardest hit by the pandemic.

A large part of the vials have left the BioNTech and Pfizer factory in Puurs, a Belgian town, 33 kilometers north of Brussels, which this week has become the capital of hope in the face of the pandemic. Puurs thus adds to the geography of peace that the community club has been forging over seven decades and in which milestones such as Schengen, Maastricht, Messina, Prüm, Rome, Lisbon or Brussels itself have covered, without condemning them to oblivion, the scars of a map marked in the 20th century by blood and pain linked to names such as Verdun, Passenchdaele, Stalingrad or Auschwitz.

From the factory in Puurs and simultaneously throughout almost the entire continent, the doses of the first vaccine against covid-19 will reach the veins of millions of Europeans in the coming months. And they will also be an injection of Europeanism after, in the first stages of the disease, they watched in astonishment at the stampede of European partners in search of their own remedy or protection.

The risk of disunity was also evident early in the race for the vaccine. In June, four of the largest and richest countries in the EU – Germany, France, Italy and the Netherlands – formed an alliance (Inclusive Vaccines Alliance or IVA) to source vaccines. And they signed a first contract with AstraZeneca to reserve 400 million doses of the drug that the Anglo-Swedish laboratory is developing together with the University of Oxford.

But the European Commission, chaired by Ursula von der Leyen, proposed a common strategy of collective purchasing, which has prevented the emergence of a dangerous nationalist reflex that left so many wounds in the past on the continent. The specter of selfishness and xenophobia once again haunted a time as grave and delicate as the scourge of a deadly and unknown disease. And it could have encouraged the resentment of the members who were left behind and have sown seeds of disunity just as the club closed its first split with the departure of the United Kingdom.

Commissioner Kyriakides welcomes that “six months after presenting our strategy, we have delivered on our promise that vaccines will reach all Member States at the same time; equal access has always been essential ”. To achieve this, the Commission entered into the contract for the IVA alliance with BioNTech / Pfizer. And it has signed contracts with five other laboratories, with some 2,000 million doses reserved in total for a population of 450 million inhabitants, and negotiates with a sixth. The Community budget has financed the reserve with an available item amounting to 2,700 million euros.

“Solidarity is the only way to overcome uncertainty”, emphasizes Dr. Kluge. “No one will be safe until everyone is safe,” adds the head for Europe at the WHO. The body is already collaborating with the EU to facilitate access to European countries beyond the perimeter of the Union with the aim of achieving continental health security.

European unity has been maintained despite attempts to undermine it from some Eurosceptic barracks. The Hungarian government of Viktor Orbán announced its intention to distance itself from the European strategy and bet on the Sputnik vaccine, developed in the Russia of Vladimir Putin. In the UK, the government of Boris Johnson took advantage of the emergency path of community legislation to debut the BioNTech / Pfizer vaccine before anyone else.

But the EU remained calm and followed its strategy, prioritizing the unit over a premature marketing operation like the one in London. The community approval arrived on December 21 and, in fact, it was the first that allows a commercialization of the product (baptized with the name of Comirnaty). The US authorities have not yet given their definitive authorization and the British, which until December 31 have to apply Community legislation, can now use it after the approval of the European Medicines Agency.

Finally, Orbán has resorted to vaccines authorized by Europe although in a final gesture of discrepancy he brought the premiere to Saturday. And Johnson suffered a new blow from the virus with the appearance on British soil of a variant that led other European countries to close their borders, causing the collapse in truck traffic on the British side of connections with the continent.

On the European side, the start of the vaccination campaign has coincided with the spread of the British variant of the virus, which has already appeared in several EU countries, including Spain. “Eleven European countries have already identified the VOC 202012/01 variant of covid-19,” says Kluge. “We are coordinating with the United Kingdom and the ECDC [la agencia europea para la prevención de enfermedades] to provide a response and toughen prevention measures, especially in areas where there is community transmission ”, adds the head of the WHO for Europe.

Europe is also facing the anti-vaccination movement, which questions the use of the drug, and disinformation campaigns encouraged, according to Brussels, from non-EU countries. The global battle for immunization has also sparked a race between projects encouraged by different global powers, from the EU to the United States or China and Russia. The European Medicines Agency suffered in the final stretch, precisely, a computer attack that allegedly sought information about the medicine from BioNTech and Pfizer.