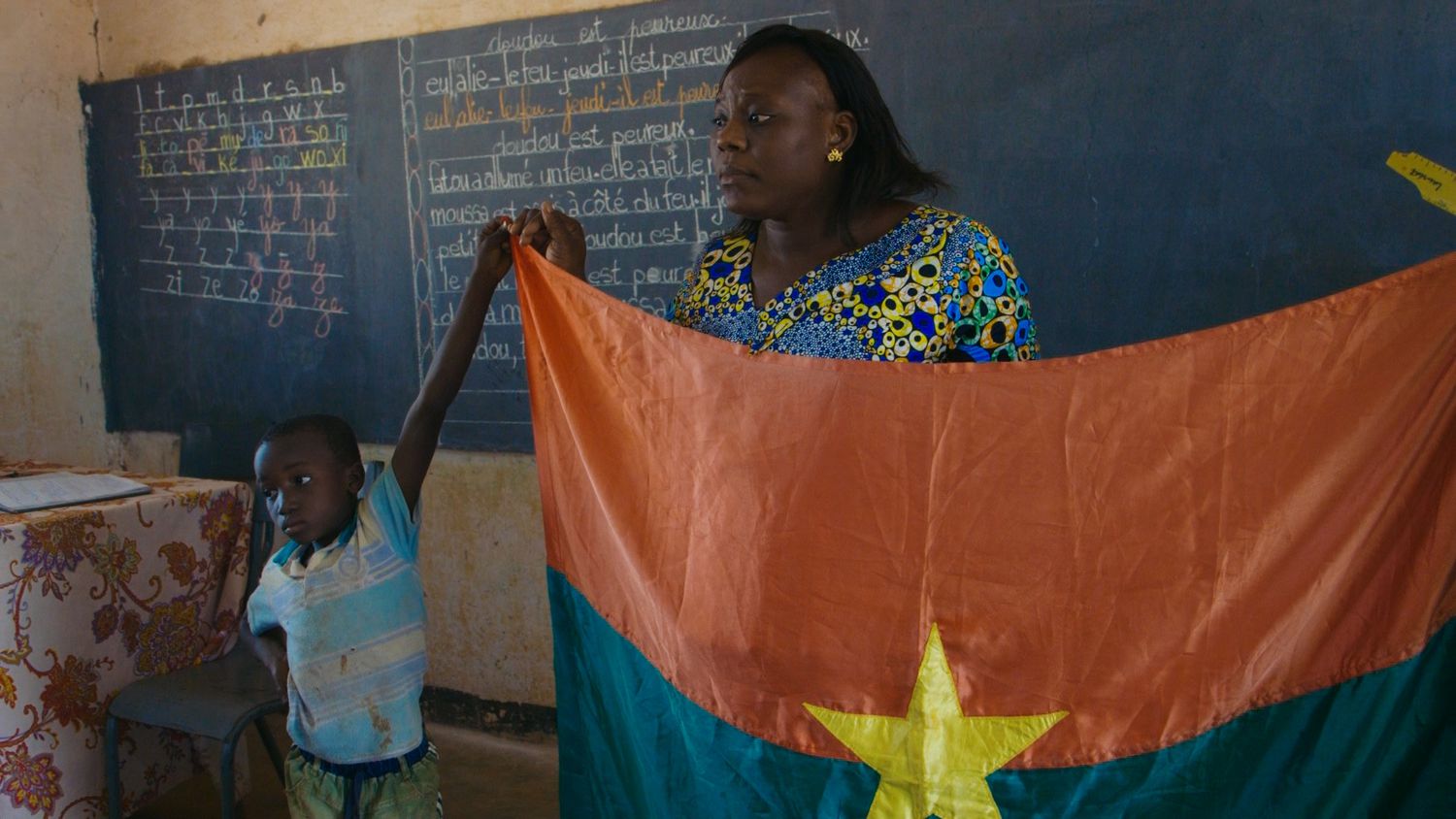 Note to readers: EL PAÍS openly offers the Future Planet section for its daily and global information contribution on the 2030 Agenda, the eradication of poverty and inequality, and the progress of developing countries. If you want to support our journalism, subscribe here.

The Burkinabe poet Bikontine has to circumvent the concrete blocks and loose iron at the end of the rail without a train to continue his journey on foot. The construction of the railroad tracks is abandoned, but the towns continue forward, it seems the symbolic message of the documentary Sankara is not dead (Sankara is not dead), by French director Lucie Viver. To talk about this experience, Viver was invited to the debate on anti-colonial visions, 60 years after African independence from The Tree of Words, in the 17th edition of Tarifa-Tangier African Film Festival (FCAT), sharing a table with Congolese political scientist Mbuyi Kabunda and filmmaker Billy Woodberry, moderated by Oliver Hadouchi.

The French documentary is a vindication of the legacy of Thomas Sankara, through the story of a moment hinge in the history of Burkina Faso: the one that followed the popular uprising and the overthrow of Blaise Compaoré, in 2014. In the unfinished tracks the hope of resuming the construction of the railway is narrated, a project initiated by the French colonizers, continued during the presidency of the leader Sankara and abandoned after his assassination, in the coup of 1987.

Viver was fascinated by the lively and passionate culture of political debate exhibited by Burkina Faso: “I discovered the figure of Sankara that those of us who study History in France do not even know about.” The victory of the popular insurrection of 2014 and the enthusiasm of the people prompted her to film “that hope”, before the disappointment arrived.

“What will happen after having deposed the president who was 27 years in power?” The filmmaker asked the poet. Trying an answer led them to travel together the only railway line in that country which, in 1984, ceased to be called Upper Volta to proudly name itself Burkina Faso, which means “homeland of men of integrity” in moved Y Diula. Thus, the poet speaks in a metaphorical way of that road made of workers too young and too exhausted by the gold mines, of the people of the cotton fields and of those who manage with urban commerce, while the film puts images to the reality of the survival of some citizens who do not throw in the towel, even if in a hard working day they earn just a package of sugar.

“2014 was another moment of independence, where people took to the streets to end the idea of ​​African politics dependent on European countries. It was called ‘the revenge of Sankara’, who was a politician with anti-imperialist ambitions, who worked for the emancipation of his country ”, concludes Viver.

Skulls for a European Museum

A history of Africa (A story from Africa) is the name of the experimental short film by Billy Woodberry, which gives a face and a name to both the colonizers and the last resistance in southern Angola. It is about the research that the North American director carried out, based on a photograph he saw in the Museum of Resistance and Liberation, in Lisbon, and that dates back to the military campaigns of Portugal to bend the will of the peoples quamate, the intrepid warriors of the border with Namibia, in the German dominions.

“I was struck by a photograph with two lines of people bound and surrounded by barbed wire. I thought it was the time of slavery, but when I got closer, I saw that it was from 1907 and had been taken during a military campaign in southern Angola, to ‘pacify’ the region. Above the handcuffs were two lines of African men with pistols and a white bearded man wearing a helmet, ”Woodberry describes. The short film is made solely of those photographic records, which pass slowly and ominously, to remind us that we were able to put wire necklaces, chaining naked people together, until just a few decades ago.

The film is screened within the framework of the FCAT, at Filmin, together with a Konradin Kunze animated short, The mortal remains of Chief Meli, on the eagerness of the European museums of the 19th and early 20th centuries to obtain ethnographic treasures. In this case, the story that takes place in Tanzania refers to the German stubbornness of having collections of skulls, in order to measure and study them in detail, to conclude that the measurements of the skull of a being civilized they are different from those of the heads of the native African people.

Afro-optimism and women at the head of the States

“In Africa today people live better than a hundred years ago, but worse than 60 years ago and this does not mean making an apology for colonization,” says Mbuyi Kabunda, president of the Spanish Association of Africanists. We must talk about migration, inequality and redistribution, “despite the growth that Africa has been experiencing for two decades, whose rate is between five and eight points, almost the equivalent of that of Asian dragons and tigers,” he explains. And this is one of the aspects that can be considered part of the “long road to development”.

However, the expert concedes, “the current panorama makes me adopt an attitude afroptimista: I believe in the future of Africa ”. This optimism is given by the end of the great wars, in a continent that experienced two terrible genocides, such as that of Rwanda and Darfur, in its recent history, and a supremacist regime of a white minority, “which lasted more than three hundred years ”, in South Africa.

“In Africa today people live better than a hundred years ago, but worse than 60 years ago and this does not mean making an apology for colonization

Mbuyi Kabunda, President of the Spanish Association of Africanists

“Today the African continent is moving towards peace, although four conflicts are still alive. But there are African solutions to African problems, ”he says. In his opinion, the creation of the African Union (AU) represents an instance that surpasses the Organization of African Unity (OAU), which was a “club of heads of state”, while the AU “involves more the peoples and one of its objectives is to fight poverty ”. The other important steps in integration are, in his opinion, the existence of a free trade area to favor exchanges between Africans, “which is the largest in the world” and the fact that women have gained a certain role in high-level positions of public responsibility, as confirmed by the heads of state of Liberia, Central Africa and Malawi, and the Rwandan parliament, “where 60 percent of parliamentarians are women.”

In Kabunda’s vision, “there is no going back in the democratization process that has taken place, since the late 1990s, through the holding of municipal, legislative and general elections in almost all countries, while we attend the appearance and development of an active civil society and with social movements that have put dictatorships in check ”.

In the future, the political scientist sees an Africa emerging as a demographic power: “Africa is not a country, it is a continent with 55 states and more than 1,200 million inhabitants (in 2050 it will be practically the most populated continent in the world) and At the same time, it is a cultural power, with its different areas, the Bantu, of East and Central Africa; the Hausa-Mandinga area, in West Africa; the area of ​​the Horn of Africa and the Nile basin and that of the indigenous people, which explain the survival of the cultural being of this continent ”.

There is, adds Kabunda, “a cultural unity that is expressed through orality, rurality, spirituality and collectivism, which are common values ​​of African culture, while there is diversity, depending on how you live in the desert, in the jungle, in the savannah or by the river, and this explains the cultural richness, which should promote films in native languages ​​and not only in the languages ​​of the colonizers ”.

The conclusion is that in Africa it is possible to create unity from difference. There is unanimous agreement at the table.