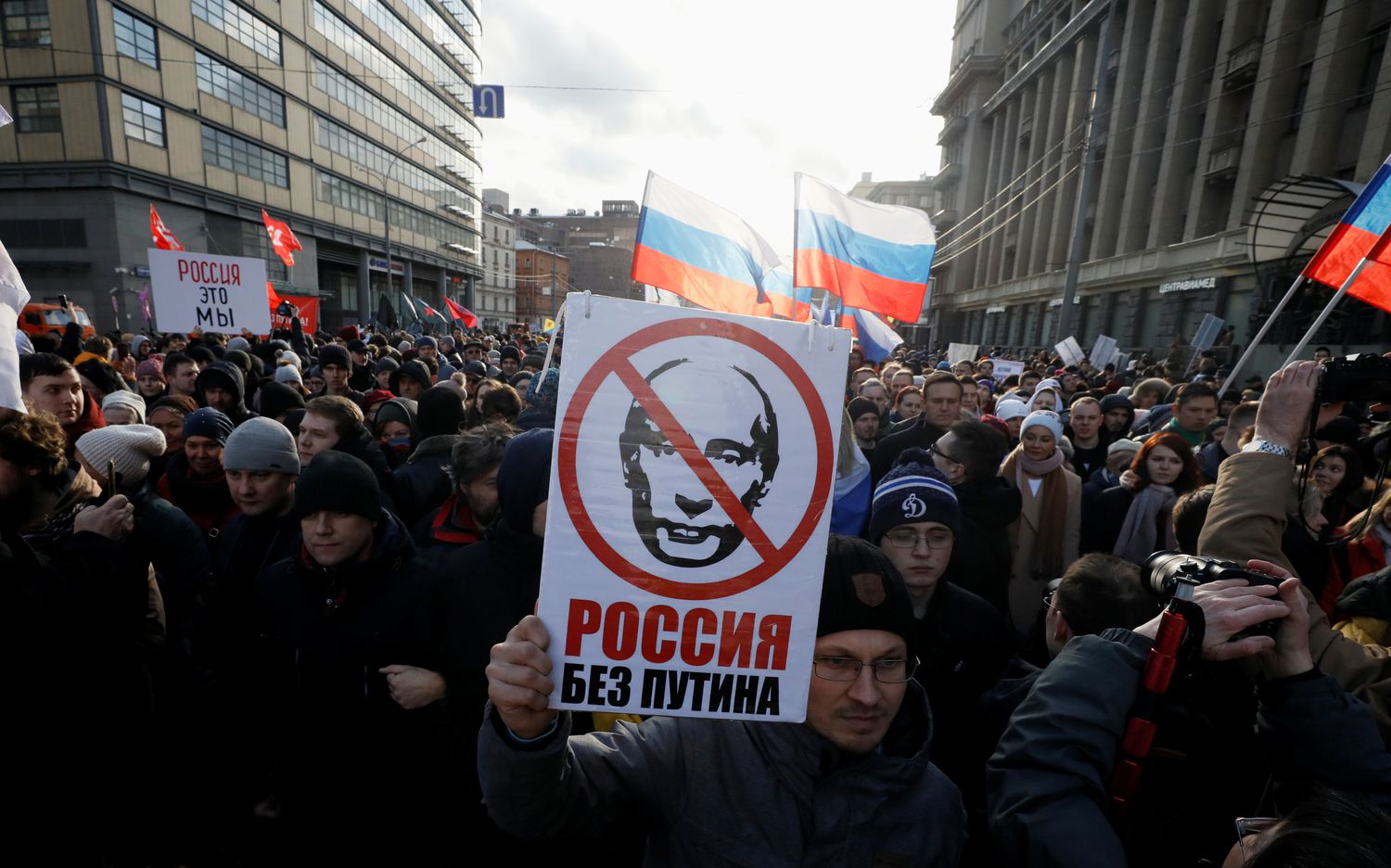 With the popularity of the ruling United Russia party at a lows 10 months before a crucial legislative elections and alerted by citizen protests heating up the Russian Far East and part of the post-Soviet space, the Kremlin is unwilling to leave loopholes for the opposition. . Several bills that have begun their parliamentary journey propose to toughen the already rigid Russian electoral laws and further restrict the right to demonstrate. Alluding to the prevention of “external interference”, they seek to expand the infamous label of “foreign agent”, associated since Stalinism with subversion and espionage, to electoral candidates who receive any type of support from outside; which could drive them away from politics. The measures, abstract enough to cover a good number of people, would give the authorities more tools to empty the lists of candidates dangerous and independent aspirants.

Russian law already provides since 2012 to declare “foreign agent” to non-governmental and human rights organizations that receive funding from abroad. A formula that social entities have been denouncing for years as a way to prevent their work. In 2017, the media were also included and a year ago journalists and bloggers. It is not just a symbol or a phrase – quite toxic and closely related to the concept of “enemy of the state” of Soviet times – those labeled like this must undergo further state controls, searches and audits.

The proposal now is to extend the term to “people involved in social or political activities” who have received “material or organizational support” from abroad, “real estate benefits”, and even opens the door to use it with people who have attended an organized event. or sponsored from outside Russia or by someone foreign. Persons who collect information on Russia’s military activities and electoral candidates affiliated with or related to a person declared a “foreign agent” may also be declared “foreign agents”.

The prominent opponent Alexei Navalni, who is recovering in Germany from the poisoning suffered this summer in Siberia, of which he directly accuses President Vladimir Putin, is usually already vetoed for other and various circumstances, such as court convictions. But the new legislation, added to the battery of measures that the Administration habitually uses to block dissent, could now also put many difficulties for his team or anyone related “directly or indirectly” to its initiatives, believes political scientist Tatyana Stanovaya.

The Anti-Corruption Fund founded by Navalni, which is dedicated to spreading scandals of the country’s political and economic elites, already received the label of “foreign agent” in 2019. Now it could be used against people related to its Smart vote initiative, designed that same year, for the local elections in Moscow, which studies and publishes which registered candidates have the best chance of beating United Russia. The initiative this year helped independent candidates to gain a foothold in various regions of Siberia.

In addition, if a candidate declared a “foreign agent” gets approval to go on the lists, they will have to wear that label clearly on the ballot papers, electoral propaganda and it is even proposed that the media that report on them have to use it. Something that, given the negative connotations of the term, could dissuade the vote. Being a “foreign agent” will also close the possibility of occupying certain government positions, such as municipal ones. “We are facing an attempt to expand the concept of external influence and the catalog of proposed conditions is so broad that it could be used with almost anyone. It is basically one more attempt to ban a liberal opposition in Russia ”, remarks Stanovaya, a collaborator of the Carnegie Moscow Center and founder of the R.Politik consultancy.

Lawyer Liubov Sobol, a Navalni ally, is already preparing to run as an independent in the state Duma elections next September. He tried it for the local elections in Moscow last year, but received the veto of the Administration. He went on a hunger strike to claim his right to attend, but he did not succeed. She comments that, although she knows that “everything will be obstacles” for next year, she is prepared to fight for a position on the lists. “I am sure that if Navalni or I were allowed to run and were given the same legitimate opportunities that the candidates in power have to campaign, we would win with an overwhelming score. Putin and [el líder bielorruso Aleksandr] Lukashenko are forced to resort to repressive measures against dissent because they understand that they have few measures to maintain power in any other way, ”he says.

The Kremlin and its surroundings, marked precisely by interference in the 2016 US presidential elections and others, are now the ones who increasingly slip into their discourse the idea of ​​the threat of foreign interference in the next Russian elections. “It is no secret that foreign governments and NGOs allocate impressive sums to support certain political activity in Russia. In fact, this is a form of serious interference in internal affairs, ”said Dmitri Vyatkin, a prominent United Russia parliamentarian.

The bottom line is that the ruling party is not in good shape for the state Duma elections, says Abbas Gallyamov, a former Kremlin speechwriter now dedicated to political analysis and consulting. For more than half a year, United Russia’s rating has fluctuated between 31% and 34%. In August, it experienced its all-time low of 30.5%, according to the state pollster VCIOM. And the growth prospects are not visible, with a forecast of 6% GDP contraction for Russia, according to the World Bank, and the pockets of the Russian citizenry resenting the palpable fall in real incomes – even more pronounced due to the pandemic-.

With such data, United Russia will find it difficult to maintain the supermajority in Parliament. This current fortification, together with the opposition that occupies the rest of the seats – commonly called the “systemic opposition” – accumulates the votes of discontent but then supports Putin in decisive moments, such as the populist and ultra-nationalist Liberal Democratic Party or the communists, It guarantees you control over the approval of laws.

The loss of support from United Russia is not new. The brand has somehow become somewhat poisonous, and last summer not a few party members chose to run on the lists as independents to get away from their image, but that wouldn’t work for legislative elections. On other occasions, Russian President Vladimir Putin – whose popularity, according to polls, has also fallen this year however – had to intervene and re-associate his image with the party. Although that strategy did not build support or guarantee a comeback, it basically stopped the slide, Abbas Gallyamov explains. Now, the plan is to stay and continue to sell that image of stability. And play with old tools, such as the usual one to remove dissent from the public space and the media to avoid offering the image that alternatives are emerging, and new ones, such as this expansion of the label of “foreign agent” that can put more sticks in the rounds of opposition candidates.

That veto of dissent will likely happen. And protests will be triggered, analyst Gallyamov anticipates, as happened in the Moscow local elections last year, which were surrounded by the largest demonstrations in almost a decade to demand open elections. With the antecedents of Belarus, which has experienced historical protests since the August presidential elections that Lukashenko claims with 80% of the votes despite allegations of fraud, or Kyrgyzstan, where the mobilizations that denounced the adulteration of the elections overthrew the Government in October, the Kremlin wants to cover all the bases. Thus, more instruments have also been included in the package to limit public meetings and demonstrations, in addition to establishing more rules for the journalists who cover them.

Russian citizens often circumvent the strict rules that require obtaining an administrative authorization to demonstrate with creative formulas such as the so-called lonely pickets, a one-person protest, often done in turns, which can trigger huge queues to raise a banner for a few minutes. An increasingly popular method (between March and August, 774 lonely pickets in which thousands of people actually participated, according to the NGO Apology of Protest) which will also be very restricted.