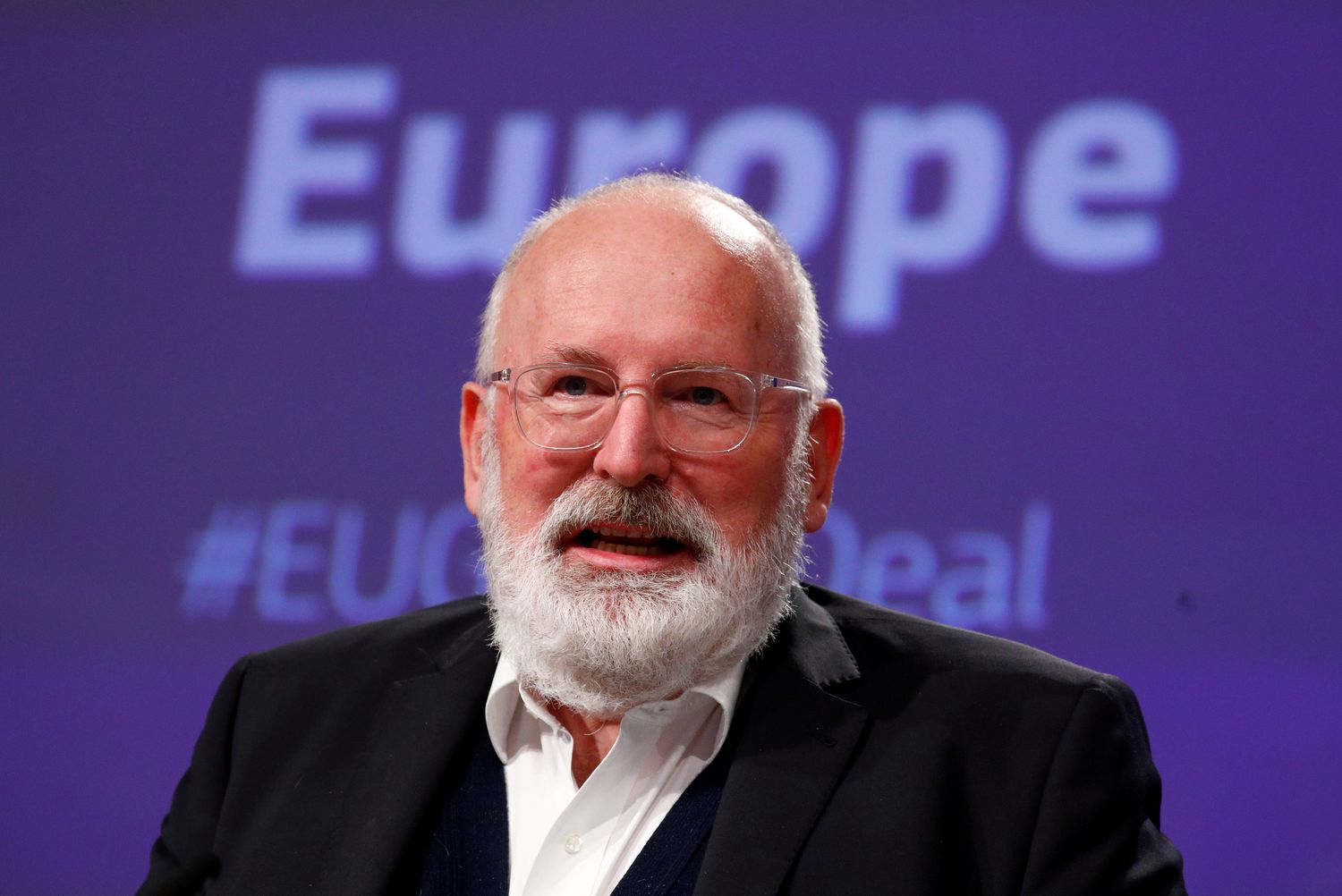 A few hours before the summit in Brussels on Thursday and Friday, in which the European Union faces the veto of Hungary and Poland to the European budgets and, rebound, to the new objectives in the fight against climate change, the First Vice-President of the European Commission, the Dutch Frans Timmermans (Maastricht, 59 years old) is confident in the possibility of reaching an agreement. But he warns against the temptation to give in to Poland and Hungary, which are pursuing with their veto to abort the new monitoring mechanism on respect for the rule of law in all EU partners. “To renounce the rule of law would be to renounce the EU,” Timmermans warns during an interview with EL PAÍS and the Polish newspaper Gazeta Wyborcza, on behalf of the European media group LENA.

Question. This week’s European summit expects to agree on the 2030 target of a 55% reduction in CO2 emissions compared to 1990. Is it possible with the Hungarian and Polish veto on budgets to curb the rule of law mechanism on the table?

Answer. The two issues are linked. To reach a 55% reduction in 2030 we must have the financial resources to invest in industrial and technological transformation. But with that said, I am quite optimistic about the possibility of reaching a 55% agreement. Previous discussions show that there is a will in all Member States to achieve it.

P. Would it be worth giving up the rule of law protection mechanism to save the financial package?

R. The compromise on the mechanism that the Council and the European Parliament have reached is reasonable and reflects all points of view. And it is acceptable to almost everyone. Giving up the rule of law would be giving up the EU. The EU cannot stand up if it is not supported by the triangle of democracy, respect for human rights and the rule of law.

P. Hungary and Poland interpret that the Union is invading their sovereignty with the increasingly intense surveillance of the rule of law.

R. Nobody forced Poland or Hungary to sign and ratify the European treaties. Agreements are to be kept. If you sign a treaty, you have to abide by it. And Article 2 of the European treaty is very clear about the rule of law and about the nature of European society. And it is not only the rule of law, it is also the independence of the media, respect for minorities, the fact that our societies are multiform. These two countries have freely signed the treaty and ratified it, even after a referendum. Nobody imposes anything on them. And opinion polls indicate that in both Poland and Hungary there is massive support for EU membership.

P. If the veto is not lifted, there will be no budgets, no recovery fund, and no money for the Green Deal.

R. I believe that a mutually satisfactory solution can be reached based on the agreement reached by Council and Parliament. If it is to clarify the interpretation of the agreement, the chancellor [alemana, Angela] Merkel can be very helpful in ensuring that everyone has the same reading of the text and clarifying what is not included. That can be the basis of a solution. If not, we would have to look for an alternative to carry out the recovery fund with 25 Member States, without Poland or Hungary.

P. Even if the agreement on 55% emission reductions is achieved, do you think it will be enough to maintain European leadership in the fight against climate change? The UK, China and, shortly, Biden’s USA have entered the race.

R. I like that challenge. It is a race to the top. And if someone can beat us, then great, although I don’t see what will happen. But I wouldn’t care if someone does it better and faster because this is a race where no one can lose if we all run in the right direction.

P. Does it make sense to fight climate change in the middle of a pandemic that has already caused a million and a half deaths in the world and more than 350,000 in Europe?

R. The vaccines are about to arrive in the Member States and the vaccination campaigns will start soon, so that in covid-19 the light is seen at the end of the tunnel. But there is no vaccine against the climate crisis. There is no vaccine for the biodiversity crisis. And those crises are an even greater threat to humanity than this pandemic. So there is no choice. We must act now. Because if we want climate neutrality in 2050, we must start now, given the length of investment cycles and the timeframes required to restructure an economy.

P. What will the Green Pact translate into for the ordinary citizen?

R. To begin with, 400,000 people a year would stop dying prematurely due to poor air quality. That would already be a great success. We would also have clean energy at an affordable price. We would have new jobs, for which we could train new staff or current templates. We can also be leaders in circular economy, in cleaner mobility, in agriculture with less pesticides. It is the Europe that we can achieve in one generation. 2050 seems a long way off. But it’s only 30 years. I’m going to turn 60 in 2021 and now the world of three decades ago seems to be just around the corner. The same thing will happen to my children in 30 years.

P. But people affected by the current crisis may not be in a position to accept change. How are you going to convince them?

R. Of course, everyone in Europe is now thinking about their health and their work. But the pandemic is not going to stop the industrial revolution that is taking place worldwide. Technology has taken a great leap forward and that makes the industrial revolution unstoppable. Our task is that it is done in a fair way and that no one is left behind.

P. Far-right or Europhobic populist parties seem willing to exploit the fears that this transition generates, exacerbated by the crisis of the pandemic.

R. What we call populisms or reactionary movements are the result of two things. First, that many people feel abandoned and consider that they are left behind. That is the most urgent thing to solve. And for this it is not enough to criticize the populists, even if they deserve it. The problem will still be there. Liberalism has bypassed too many people in the last 20 years. The second problem, related to the first, is that we are in the middle of an industrial revolution that is going to transform societies. And we know from previous industrial revolutions that in this situation all institutions, be they political or economic, are questioned. And that is what we see today. And there are two options. Or you adapt and shape the revolution for the benefit of all of society. Or the industrial revolution adapts you. Either you redefine yourself or something new emerges to face the new context. But Europe has an admirable capacity for resistance and adaptation. And the EU too. We always go to the precipice and when everyone thinks we are going to fall, a solution is reached.

P. But, how do you explain that in countries as rich as yours, Austria or Germany, populism also triumphs?

R. The success of the populists always depends on the reaction of the other parties. And I think that someone who comes from Spain will understand well what I mean. The example is Bavaria. When AfD emerged, the conservative reaction was to move in the same direction and use the same language. And the only effect they achieved was the growth of AfD. Until a person like Markus Söder, the president of Bavaria, began to distance himself from the extreme right. And it created space for a new conservative center, with social, environmental policies, as part of a conservative vision. And it was successful. Extremists rely heavily on the will of others to work with them. I do not believe that right-wing radicals can achieve a majority on their own in almost any country. But in combination with other conservative forces, they can.

P. And in the Netherlands, where the populists win integers three months before the elections?

R. Despite the fact that my country is considered rich and that it enjoys economic success and enjoys a good policy of redistribution, there is a part of the citizenry that does not feel part of that success and considers itself abandoned. For the middle classes, from a police officer to health or education personnel, the situation is better than before, but in relative terms they are not benefiting as much from growth as others. We have, for example, a lack of teachers in some cities. And it is not for lack of personnel. It is because teachers can no longer afford to live in some cities because of the high price of housing. These are the kinds of problems we must solve.