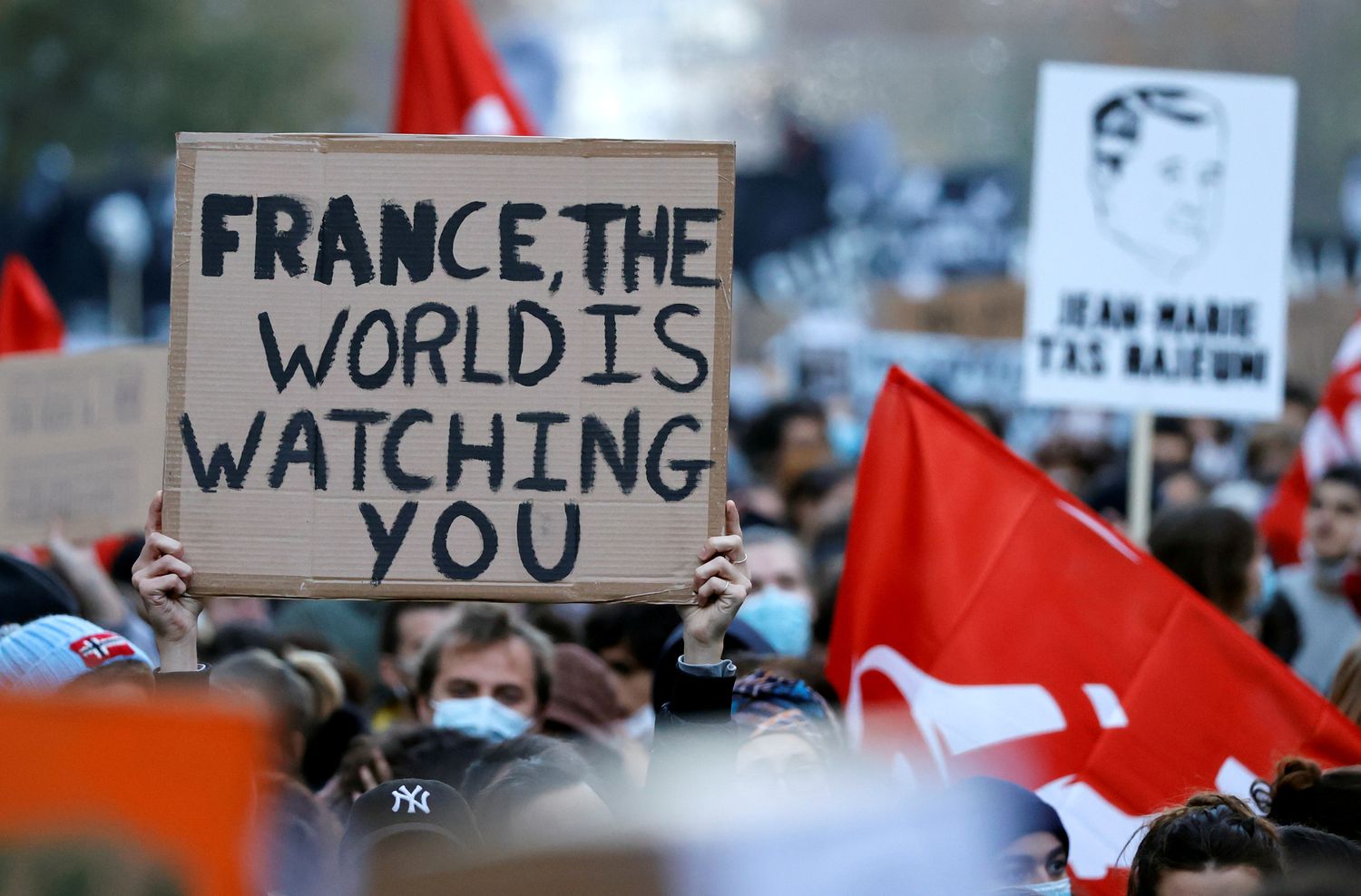 French President Emmanuel Macron seeks a way out of the mess that he himself, his ministers and his deputies have caused with the so-called global security law. Macron wants a review of the law and its most controversial article, the 24th, which limits the dissemination of images of policemen and gendarmes and which violates freedom of information, as denounced on Saturday by tens of thousands of French people who demonstrated throughout France. The leader tries to prevent social unrest from festering and ending up causing a political crisis in the midst of a health and economic crisis. It wants to introduce changes in the methods of training and leadership of the forces of order after the repeated episodes of violence known, precisely thanks to the videos whose dissemination Article 24 seeks to restrict.

In view of the massive protests, Macron tries to limit the damage and avoid a political crisis that would add to the economic and health crisis that France is experiencing and that, unlike the latter two, is the product of miscalculation and management of the own president and his government. Macron has summoned the Prime Minister, Jean Castex, the Ministers of the Interior and Justice, Gérald Darmanin and Éric Dupond-Moretti, and the leaders of the presidential majority in the National Assembly, to read them the primer on Monday at the Elysee Palace. and bring order to a situation that threatens to get out of hand.

“We will propose a complete new wording of Article 24,” said Christophe Castaner, head of La República en Marcha (LREM), Macron’s party, after the meeting. The article exposes to one year in prison and a 45,000 euro fine to anyone who disseminates, “with the aim of attacking their physical or mental integrity”, images of the face of a law enforcement officer. The fear is that the ambiguity in interpreting whether published images have malicious intent may lead to a restriction of the right to document abuses by police officers.

Castaner’s words do not mean that the article will be suppressed, as requested by part of the opposition, but they are an admission of responsibility: the same deputies who will now rewrite it supported it on November 21 by an overwhelming majority. And this would not be the first revision of the text.

On November 19 – when, from journalists’ unions to the Ombudsman, they alerted of the dangers of the law for freedom of expression – Castex already agreed with the deputies an amendment aimed at ensuring that the right to information would be preserved. The first review did not help much.

The text, after being approved in the National Assembly, passed to the Senate, which will examine it in January. But the outcry against Article 24 continued to grow. It was reinforced after the violent evacuation, on Monday night 23, from an immigrant camp in the central Place de la République, in Paris. And it exploded after being broadcast, on Thursday 26, a video in which three policemen were seen beating a black music producer, Michel Zecler, for no reason, in his Parisian studio. “The images that we have all seen of the attack on Michel Zecler are unacceptable. They embarrass us all, ”Macron wrote on Facebook. The outrage was transversal and reached Elysee himself.

The episodes of police violence acted as an electroshock with a double effect. First, because of the violent and arbitrary actions of the forces of order, denounced for years but rarely documented with the harshness of the past week. And second, because of the evidence that many of these actions would never be known, and those responsible would not be punished, if it were not for the cameras and for the right to broadcast the images.

Castex said it would create an independent commission “charged with proposing a new wording of Article 24”. It was the second revision announced in a week, but it was short-lived. LREM chiefs and Macron’s allies in the National Assembly rose up against what they saw as meddling by the executive branch in the legislature.

The discontent of the Macronista deputies, who were rarely publicly critical of the government, was increasingly evident. They accused Castex of despising them. And the Minister of the Interior for having sowed confusion about the law that he himself had promoted by stating, for example, that it would prohibit filming the police – which he does not say – or that it would force journalists to accredit themselves to cover the demonstrations.

Massive protests on Saturday – mostly peaceful, but killing 88 police officers – showed that the law could become a serious problem for Macron. A legislative problem, but also a social one, if mistrust between a part of the population and the police is permanently installed.

The first response is the will, on the part of the macronista deputies, to “completely rewrite” Article 24, the third revision announced in less than 15 days. Castaner did not reveal what the changes will consist of. Macron’s second response was to commission Darmanin, weakened by his rhetorical excesses, to tone down and propose reforms in the forces of order.

Before the Judicial Affairs committee of the National Assembly, the Minister of the Interior pointed out deficiencies in the training of policemen and gendarmes, lack of equipment and errors in command. For years, French officials have refused to acknowledge that “police violence” was a reality: it was isolated cases, bad apples, in no way a systemic problem. Darmanin has admitted the existence this Monday of “structural problems”.