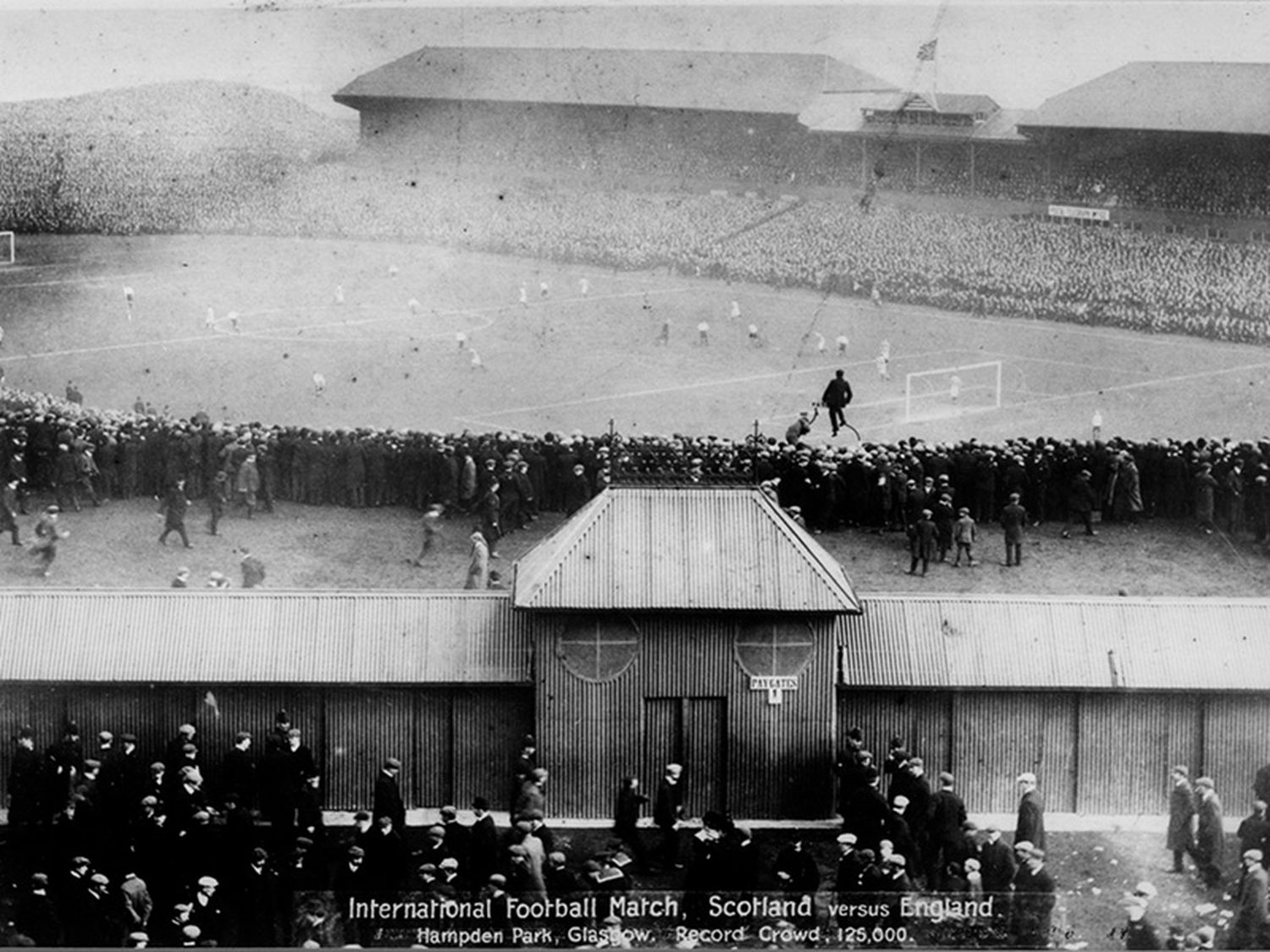 The first great field of football that scottish engineer Archibald Leitch designed, in 1902, it fell. A grandstand collapsed and 25 spectators died. It was Ibrox Park, the home of his team, Glasgow Rangers. Leitch, a very football fan, watched from his seat the match between Scotland and England and the collapse of the wooden plank terrace that he had designed. Far from assuming the end of his career in expanding sports venues, this designer From factories he obtained a score of orders from the best English football teams.

Some of his works, such as the stands that have formed since 1905 Craven Cottage –The field of Fulham FC, a club based in the wealthy South West London neighborhood of the same name – are protected by the British Government and cannot be played without special permission. His rise after the first failed work was as striking as his fall into oblivion after his death in 1939 after having designed Old Trafford (Manchester United) o Stamford Bridge (Chelsea).

Simon Inglis, his biographer, reels the life of Leitch in the book Engineering Archie, published in 2005. This graduate in Architecture explains over the phone the reasons that made Leitch the great architect of the english soccer of the twentieth century despite the initial fatality. “He wrote an emotional letter to the Rangers insisting that no one regretted what happened as much as he did. He was desperate to be considered a good professional. He wasn’t going to give up. ” Leitch, a Glasgow-born Protestant, had charged nothing for the remodel, had led the project out of love for the club. Its main activity until then was summarized in the design of factories.

“He was a very fighting man, energetic. After the accident, he told those responsible for the club that hiring another engineer was the same as pointing out him as guilty of the tragedy, “adds his biographer. Adding to the self-denial of this practicing Christian was an expansive personality. “He was sociable and confident, very charismatic. A businessman. He liked to drink and laugh, ”says Inglis. Leitch was released from charges of the Ibrox Park tragedy and the blame fell on the wood producer, who delivered beams of lower quality than those agreed upon, although the biographer admits that he would surely do so with the architect’s collusion. Leitch’s career not only did not slow down, it was relaunched.

El Glasgow Rangers He agreed and commissioned the stadium restoration works. A year later, Middlesbrough, a team in the English first division, hired his services, followed by orders from Chelsea and Fulham. Leitch wasn’t about to make the same mistake that killed 25 spectators and landed 500 fans in the hospital. He abandoned the wooden terraces supported on a steel frame and patented a new system of tubular steel and reinforced concrete beams on which the stands rested. “The tragedy had shown that it was safer to support the seats on the floor, not raised stands and supported by beams,” says this soccer historian.

The orders followed one another. In its most prolific time, the 1920s, 16 of the 22 teams from the first english division they had hired his services to undertake reforms in their fields. “In other places they opted for more rounded stadiums, more like a bowl. Rectangular fields were built in Great Britain ”. Read on to discover some of the most iconic that bear Leitch’s signature.

Leitch was commissioned to build a new grandstand for 5,000 spectators because the previous one did not comply with security measures. La Stevenage Road Stand, today known as Johnny Haynes Stand –In honor of the best player in the club’s history– it was inaugurated at the beginning of the 1905/1906 season. According to the Fulham FC official website, Leitch had to build changing rooms under the new grandstand so a cabin had to be built in a corner to welcome footballers before taking to the field. Today it is still the place where the players and the referee change. Craven Cottage it is located next to the Thames, in the wealthy neighborhood of Fulham.

When the Tottenham He joined the elite of English football, in 1909, he commissioned Leitch to build a new stand. A copper rooster and a ball, present today in the shield of the Spurs, adorned the roof of the new rostrum. With the money obtained by the achievement of the cup in 1921, the club hired Leitch again for the extension of a grandstand. The capacity of White Hart Lane It went from 40,000 to 58,000 viewers. Years later, in 1934, he was commissioned to expand the East Stand so that the stadium of this North London team could reach 80,000 seats. Not all of them sitting, of course.

Outside of Old Trafford there is a bronze statue of George Best, Denis Law and Bobby Charlton embracing. These three footballers, known as the Trinity United, they were part of the team that won the 1968 European Cup. Dennis Law, forward, was Scottish. Like Matt Busby, the coach of that team that revolutionized football with an offensive game, cheerful and full of young people, according to specialists. Easier to remember is Alex Ferguson (27 years at the club, 38 titles), born in Scotland, like Leitch, the ubiquitous engineer who built Manchester United’s stadium in 1910. Manchester is in the north-west of England.

Before Leitch’s intervention in 1914, the Villa field it was oval and with a track that ran along its perimeter. The architect proposed to convert the stadium into a rectangular enclosure like all his previous works. But the true architect of the Trinity Road Stand was the president of the club, Fred Rinder, which intended to increase the capacity of Villa Park to 104,000 spectators. When the Duke of York inaugurated the work in 1924 the cost had risen to 65,000 pounds (the most expensive player at the time was worth 5,000 pounds), according to Inglis in his book. Rinder’s work was completed with the construction of the first restaurant on a UK football field. The slipway has been modified so many times that despite being one of the most valuable, the Government did not grant it protection. Only the brick facade remains.

Leitch’s company signed the intervention of 27 stadiums between 1900 and 1939, the year of his death. Craven Cottage e Ibrox ParkBoth designed by this engineer from Glasgow, they are the only two football fields credited with state protection. His extraordinary influence in the first half of the twentieth century, however, did not earn him a mere obituary in the press of his land. Inglis explains how little recognition he enjoyed then: “Until the seventies or eighties, football was ignored in the world of culture. It was extremely rare that someone related to art would even deign to talk about this show. “

And he adds: “The stadiums that Leitch built were utilitarian, not what was understood by architecture or design. The specialized magazines looked to France, Italy or Germany if they wanted to review a soccer field ”. Leitch designed bleachers to accommodate the largest number of fans and thus justify his fees.

In spite of everything, Inglis shuns any hint of nostalgia: “Then they existed and now they exist memorable stadiums. I don’t think the atmosphere was better in Leitch’s time or in the sixties or seventies, when even the atmosphere was calmer ”. What changes for Inglis are the spectators who come and how they behave. “Leitch would hallucinate if he saw the stadiums now, which allow you to see the game well from anywhere,” he says. “The current venues, which have that lighting, sound…, seem more like a recording studio than a football field. You watch a game on TV and you don’t know if it’s happening for real or if it’s a simulation ”, he describes.

When mobility recovers, many will visit the capital of England. There is a practice known as groundspotting which consists of visiting football stadiums outside. Arsenal’s Emirates Stadium in the north is an hour by public transport from Craven Cottage, one of Leitch’s works. Sometimes you have to choose, time is not so long when you are visiting London.