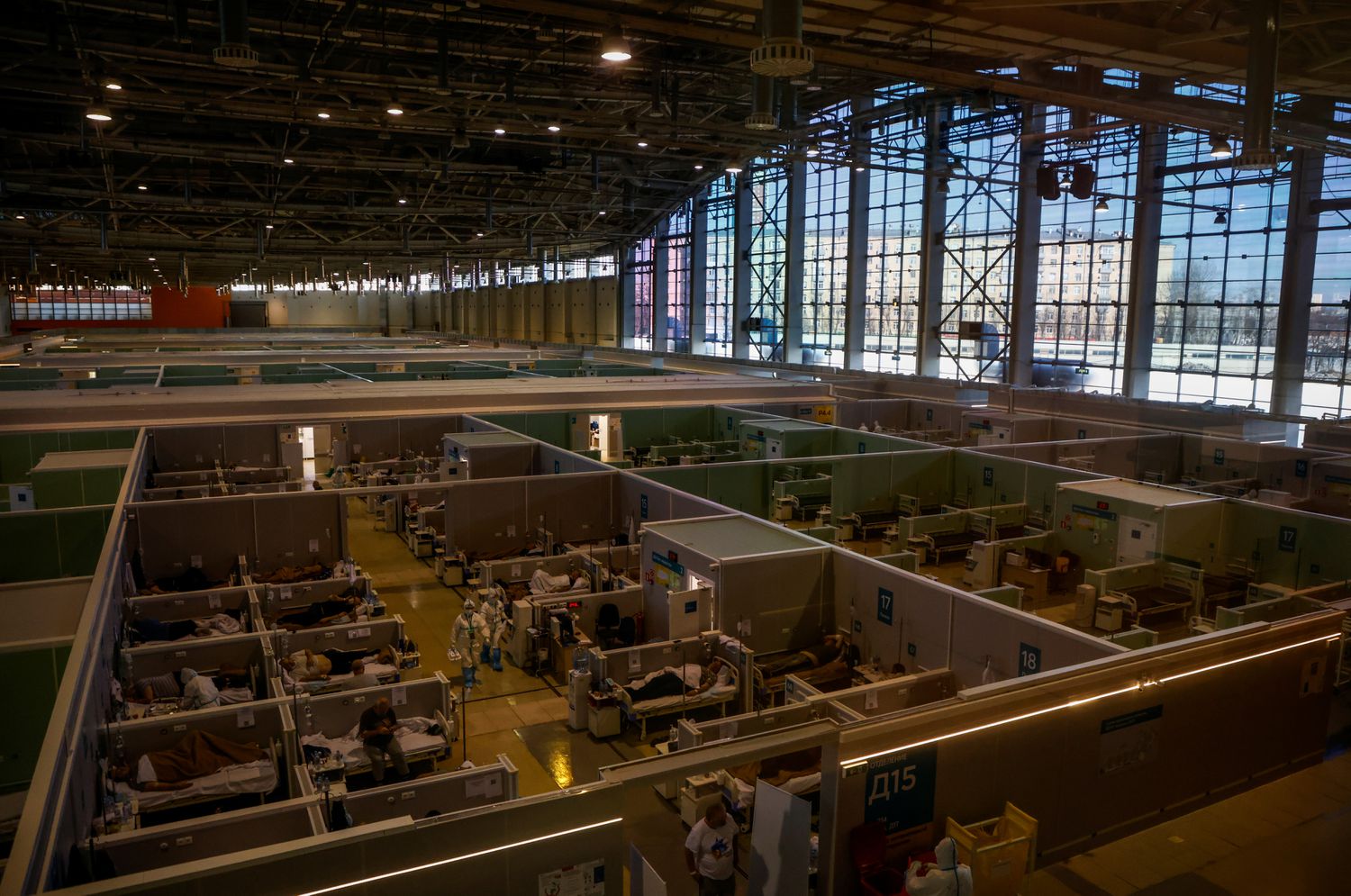 The image of corpses in plastic bags on the ground has been repeated in several hospitals in Russia. In one of the reference centers in the Siberian city of Barnaul, with the overflowing morgue, they had to be piled up in the basement. In the mining town of Novokuznetsk, a video posted on the Web by a health worker showed the corridors of a hospital so full of bodies awaiting autopsy that it was almost impossible to pass. In the Ivanovo region, the authorities have asked for support to buy cold rooms. And there are many centers that have patients crowded in waiting rooms or in chairs until a bed is released, due to the coronavirus pandemic, according to health professionals.

The virus, which hit mostly Moscow and St. Petersburg in the spring, now strongly affects the remote provinces of the world’s largest country – with 11 time zones. There, the health unions warn, saturation and the alarming lack of resources is causing inhumane situations. In half of its 84 regions, cases exceed the national average; in six, hospital occupancy exceeds 90%.

Despite the pressure for assistance and the fact that infections continue to increase, the Kremlin is ruling out confinement measures for now, such as those that in the spring were a blow to its already burdened economy. Only one of its 84 regions has confined. Russia (145 million inhabitants) is the fifth country in the world with the most registered infections, after the United States, India, Brazil and France, with 2.2 million cases and more than 38,000 deaths, according to official data. Every day some 27,500 new infected are added to the official registry and, in the last 24 hours, 496 deaths, both record figures.

However, many experts believe that these figures are below reality, due to the problems in conducting the tests – up to 40% are negative because they are not carried out correctly, as recognized by the authorities – and the accounting mechanism deaths: health protocols leave out a good number of those who had previous pathologies, which are identified as the cause of death.

The number of deaths “should be multiplied by five or six,” warns demographer Alekséi Raksa, employed until this summer by the official statistics agency. Raksa has thoroughly analyzed civil registry data from Russian regions, which have become even more opaque since the pandemic.

The covid has highlighted the deficiencies of the public health system and its abysmal differences between the capital and other cities rich and the provinces. Three-quarters of the cases are concentrated in them this fall. The Siberian region of Altai (whose administrative center is Barnaul) is one of the “critical”, according to official statistics, that the territory’s own health minister, Dmitri Popov, believes underestimated. Authorities are studying how to convert two shopping centers into field hospitals.

In Murmansk (northwest of the country), where some 25,000 cases have been officially detected and around 500 deaths from covid have been registered, several centers are at the limit, claims the nurse Natalia Seligerskaya. “There is a lack of medicines and above all we do not have adequate facilities,” says the health company, which has worked for a decade in one of the Murmansk hospitals and is the regional leader of the Alianza de Médicos union.

Seligerskaya denounces that in his region, as in others, “irrational” measures are taken or only to get out of the way and stop criticism, which undermine the strategy to tackle the pandemic. Like the opening of a field hospital for coronavirus patients in late spring that did not receive any patients. It cost a billion rubles (about 11 million euros). Today that the region (303,000 inhabitants) deals with at least 300 new cases a day – 20% of them serious, according to the authorities – only the framework remains. It has been dismantled. Meanwhile, five special facilities for covid patients have opened in Moscow this fall. The last one, this week: an ice skating rink turned into a field hospital.

In Kemérovo (530,000 inhabitants), with about 180 new cases detected a day, there are still beds, says the health utility Elisaveta Plotnikova. Although he acknowledges that the waiting time is “very high.” “If cases continue to grow at a good rate and more resources and other measures are not put in place, we can become saturated,” he says by phone.

The emergency services are carrying an even heavier load, warns Andrei Konoval, from the Acción medical union, where half of its members are emergency and ambulance workers. In the Moscow region the average to be transferred to a hospital in a medical vehicle is now 24 hours. And the situation in the regions is even worse. In some cases, in addition, it may take even longer to find a hospital with a free bed.

After weeks of going around on the subject and denying the serious health crisis despite the videos circulating on the networks and the complaints from their own health workers, the authorities are gradually recognizing the problem. Although they blame other factors. The Novokuznetsk Health Department said in a statement that the morgue was overflowing because many of the relatives of the deceased were also sick or in quarantine and could not claim the bodies for burial.

In Barnául (625,000 inhabitants) the regional authorities blamed their hearse supplier for the “delay” in the “withdrawal” of deceased patients. In the Ivanovo region they argue that their morgues are very small.

The Kremlin has defined the situation as “alarming”, and a few days ago, Russian President Vladimir Putin gave the regional governors a little rapture about the situation in their territories and stressed that they had the powers to address the problem and take measurements. Although until the arrival of the pandemic, few decisions were made at the territorial level.

Some have taken measures, such as banning their doctors from speaking to the media or recording with mobile phones in hospitals to avoid videos of their saturated facilities that embarrass them on the Internet. According to data from the Duma, 20% of Russian parliamentarians and regional governors have been infected with coronavirus, as have five of the 31 members of the Russian Government. Here too, the class gaps in Russia are evident. As in the case of Vladimir Sipjagin, governor of the region also called Vladimir (near Moscow), who went to a private clinic in the Russian capital to be treated for the infection. After the criticism, he assured that he did so because he did not occupy a bed in his region that another patient could use.

The Russian Defense Ministry announced this Friday the start of the Army’s vaccination campaign with Sputnik V, the immunization in which the Gamaleya public institute works, approved in August but is still in the third phase of investigation. The Defense Minister, Sergei Shoigu, explained that some 2,500 military personnel have already been vaccinated and that by the end of the year there will be around 80,000; in total some 400,000 members of the Army will be immunized.

Russia has high hopes for this vaccine which, according to its researchers, is 92% effective (and up to 95% 42 days after the first of the two necessary doses). A product that will be free for Russians and that will be sold at about $ 10 per dose for the foreign market; a cheaper price than its main competitors, Pfizer and Moderna. Gamaleya and the financier of the vaccine, the Russian Fund for Direct Investment (the country’s sovereign wealth fund, which has a reserved capital of about 10 billion dollars) ensure that at least 20 countries, including Egypt, Brazil or Mexico they have reached preliminary agreements to acquire the drug. It is not the only coronavirus immunization Russia is working on. A second vaccine, which is being developed by the Vector center, will also go into circulation in the coming weeks, according to those responsible this Friday.