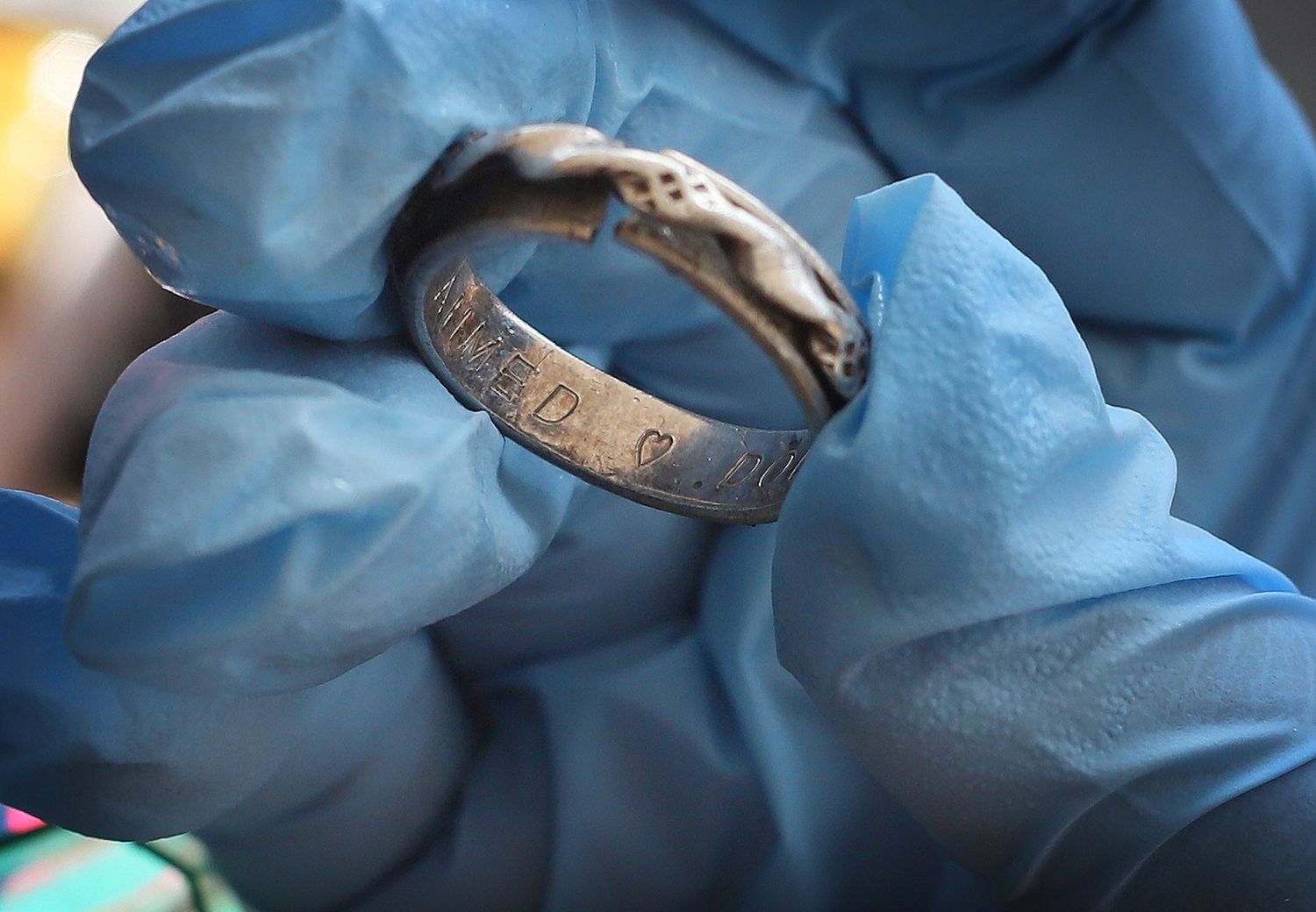 A red backpack had been floating for weeks in the middle of the Mediterranean. Chance made the crew of the Spanish humanitarian ship Open Arms found her, on November 9, while sailing to the rescue zone where the lives of 259 people would be saved in just two days. Sergi Cámara, a photographer on the boat, remembers that it gave off a strong smell of gasoline and that it had sea shells stuck to it. They opened it, hoping to find clues about its owners, but discovered something more valuable: between clothes and personal items, there were two rings. On one, two names were read: “Ahmed” and “Doudou”, separated by a heart.

The history of these Algerian migrants was not lost in the waters. On October 21, some Italian fishermen saved them from the sinking of the boat in which they were traveling along with 18 other people. The news that those precious objects did not disappear to the bottom of the sea soothed the trauma of that experience. “We could not believe it, the few things with which we started this trip have been rescued,” the couple confessed to Doctors Without Borders in Italy.

Ahmed and Doudou, 25 and 20, wanted to wait until they got to Europe to repair their wedding rings. They had been kept in a small transparent box in the backpack, along with clothes, toiletries, cell phone chargers, a tobacco box and two pictures with Arabic inscriptions. A baggage that would have allowed them to start a new life from scratch. The one they had in Zauiya (Libya) was plagued by extreme violence and danger in the middle of a country at war.

However, at 1 a.m. on October 21, after the boat ran out of gas, a wave capsized the boat, about 60 kilometers from Lampedusa. All 20 passengers ended up at sea. A fishing boat from Mazara del Vallo (Sicily), which was sailing in the surroundings, found them and rescued 15 people, including Ahmed and Doudou. The other five are still missing: a two-and-a-half-year-old girl who escaped from her mother’s arms when they were in the water, a woman with her daughter, and the mother and sister of a nine-year-old boy.

The fishing boat crew loaned them their clothes and placed them near the engines so they could dry off and shelter from the cold of the night. They landed in Lampedusa, but were transferred to a reception center in the province of Agrigento (Sicily), where they spent 14 days in quarantine, cared for by the staff of Doctors Without Borders (MSF). Ahmad Al Rousan, cultural mediator of the organization, flew from Rome to psychologically treat the survivors of the shipwreck. “What they ask us the most is about the bodies of the deceased that were not recovered. They want us to notify them when they find them to bury them, “he says.

Al Rousan was the first to receive, on the same day, the photos of the backpack recovered by the ship Open Arms. They had been sent to him by a Spanish NGO operator who knew that the MSF mediator is part of the psychological first aid team for shipwreck victims. “He asked me for advice on locating the owner of the backpack. We were very disappointed because we knew it would be very difficult to find him, ”Al Rousan recalls. He promised to send the photos to the people he had treated to see if anyone recognized the belongings.

Days later, during a telephone conversation with a survivor, Al Rousan took the opportunity to tell him the story of the recovered objects and gave him two photos. The next morning, Ahmed and Doudou called him saying that the belongings were his. “We were all very excited,” says Al Rousan. “They couldn’t believe it. They always told me that I had lost everything ”. However, the objects will take time to reencounter their owners. Currently, the Open Arms It is moored on the coast of Trapani (Sicily) while it complies with the protocol quarantine imposed by Italy as a result of the pandemic. “When we finish, their belongings will be returned to them wherever they are,” says Sergi Cámara.

So far in 2020, there have been 77,966 attempts to arrive in Europe through the Mediterranean. Some 886 people have lost their lives or gone missing, according to estimates by the United Nations Refugee Agency (UNHCR). Algeria is the second country – after Tunisia – from which the most migrants have tried to cross, with 8,880 this year.

The trauma and horror of the shipwreck will be marked in the life of the young migrant couple, who, a few weeks away, continue to be shocked by the tragedy they have had to experience. “When they found the backpack, I told them that they were lucky in their misfortune,” says Al Rousan. However, Ahmed and Doudou continue to bear in mind those who were not so lucky: “The pain remains for fellow travelers who did not make it,” they lament.