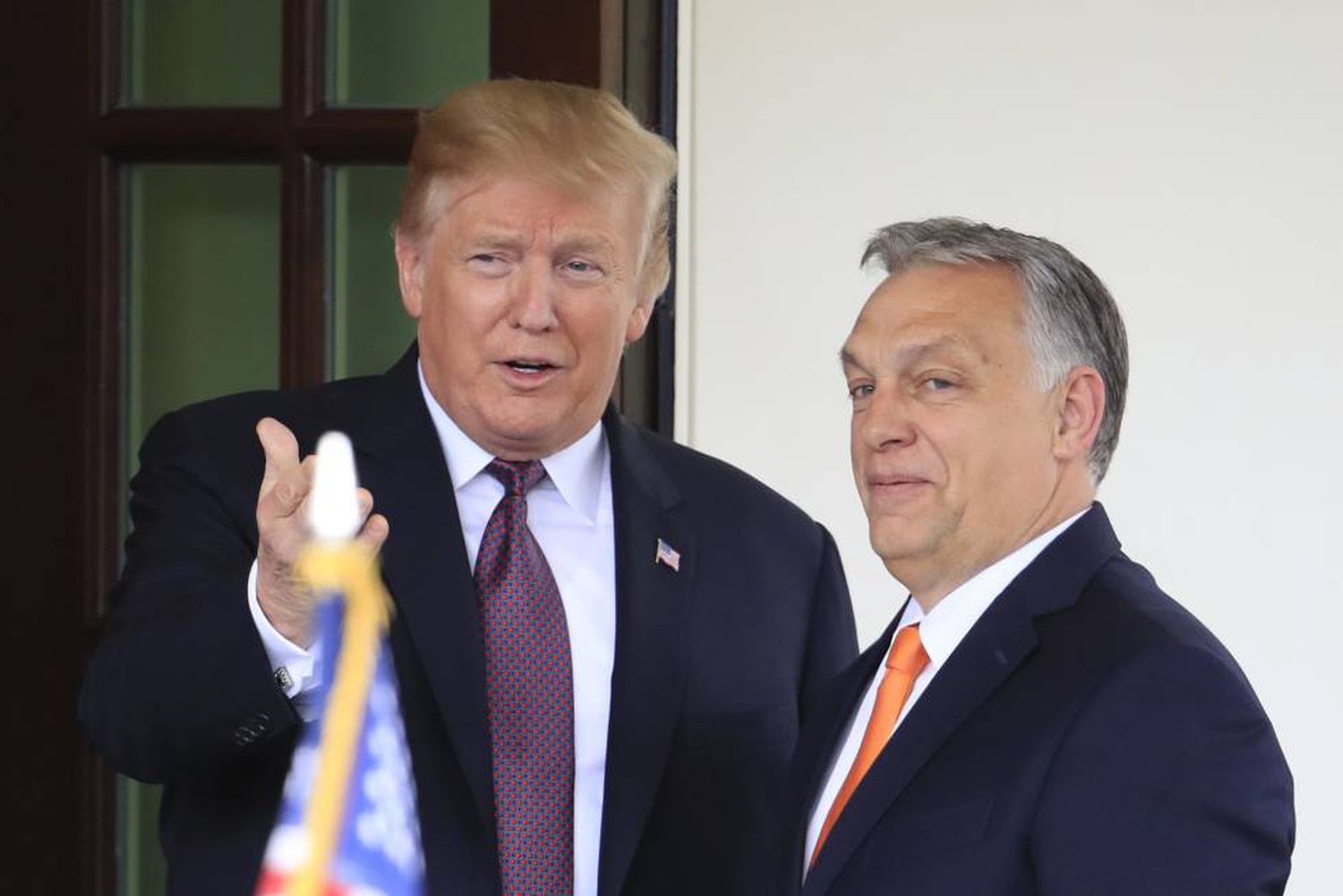 Donald Trump’s departure from the White House has left populist movements without their most visible head in world power. A handful of leaders and governments were enthusiastic about the re-election of the US president, with Hungary, Poland and Brazil as the most prominent countries. It didn’t turn out as expected. But their defeat is far from being the end of electoral trends that in recent years have placed the far-right parties in command of various executives or at the head of the opposition.

Trump’s victory in 2016 was a gift for leaders like Viktor Orbán in Hungary, Jair Bolsonaro in Brazil, Vladimir Putin in Russia, Narendra Modi in India and Rodrigo Duterte in the Philippines. The president of the most powerful country in the world joined a club with diffuse contours made up of national-popular leaders. “It complicates their lives a bit because they lose their idol,” says Brazilian analyst Oliver Stuenkel but immediately adds: “It is obvious that they are going to analyze the mistakes that Trump made and that they will do whatever it takes to avoid them. Trump did not have the discipline to stay in power. With a little more discipline, tenacity, pragmatism, he could have won the elections. “

In Europe, in particular, both the formations born before the victory of the US president in 2016 and those that have grown behind his mandate continue to enjoy a significant share of popularity, as is the case of Prime Minister Viktor Orbán in Hungary. And although the drama of the covid-19 has placed its identity and xenophobic proclamations in the background, analysts warn that the tremendous economic and social hangover that the pandemic will leave may revitalize the electoral pull of parties such as the National Regrouping in France, the League in Italy, Alternative for Germany (AfD) and Vox in Spain.

The victory of a politician with the profile of Trump four years ago had more impact among populisms than the defeat now of the Republican. Pawel Zerka, an analyst at the European Council on Foreign Relations (ECFR), believes that the momentum of 2016 will survive the withdrawal of the current tenant from the White House “because Trump has shown that there are no taboos and that makes Europe’s populists more eligible or from any other part of the world ”.

The populist hydra, moreover, now has many more heads, both visible and buried. And their influence is no longer limited to the extremes of the political arc but is also at the heart of traditional formations on the right and left. Both the European People’s Party (EPP), the Socialists (S&D) and the Liberals (Renew) host groups and leaders clearly identified with the world populist current that between 2016 and 2018 took power in the US, Brazil or the Philippines. it was at the doorstep in the Netherlands or Italy and managed to leave the United Kingdom out of the EU.

“They have taken a heavy blow with Trump’s defeat but Trumpism and populism are still alive,” agrees Shada Islam, analyst and founder of New Horizons Project, a Brussels-based strategic services and consulting firm. Islam believes that traditional parties would make a mistake if they declared populist electoral bids defeated. And it recommends that the presence of Joe Biden in the White House be taken advantage of “to establish a progressive transatlantic current that counteracts the international agreement that populism has organized during Trump’s term.”

Populist pressure on the Old Continent reached its peak between 2016 and 2019: Brexit was imposed in the UK referendum, the extreme right of Marine Le Pen seemed at the gates of the Elysee in France and that of Geert Wilders was seen with the possibility of taking over the government in the Netherlands. The leader of the Italian extreme right, Matteo Salvini, achieved the vice-presidency of the Government of his country. In addition, Steve Bannon, a former Trump adviser, now disgraced by his problems with the justice, landed in Europe with the intention of encouraging a populist wave that would sweep in the European Parliament elections.

But the most catastrophic predictions did not come true. Emmanuel Macron’s victory in France marked a turning point in the advancement of the populists, who also failed to become a key force in the European chamber. Bannon went on retreat. And Salvini fell from the Government due to an electoral miscalculation. Trump’s reelection would have spelled the end of the sequence of mishaps. But the tide of Democratic votes has impeded his second term despite the good result obtained by the outgoing president.

“One of the positive consequences of populism is that it provokes a great mobilization by the rest of the electorate,” says Zerka. And remember that the large turnout in the US also took place in the July presidential elections in Poland, where nationalist populism led by Jaroslaw Kaczynski continues to win the elections but is increasingly met with more popular resistance.

Central and Eastern Europe has become one of the main granaries of the populist vote within the EU. And the only one where the leaders closest to Trump are in power, either in an entrenched way, like Orbán in Hungary, or in an unstable way, like Janez Jansa in Slovenia. Both Orbán and Jansa belong to the PPE. But his political strategies are much more akin to Trump’s populism than to the traditional conservatism of German Chancellor Angela Merkel.

“Without a doubt, Biden’s victory will complicate the future political attitude of leaders like Orbán or Jansa,” predicts Boris Vezjak, a philosopher and professor at the University of Maribor, in Slovenia. Vezjak believes that Hungary and Slovenia and other central European countries will find it more difficult to continue with policies that, in the opinion of this philosopher, “advocate new forms of authoritarianism and so-called illiberal democracy, with individual freedom limited and subordinate to a national culture and tradition ”.

European populists will lose, from the outset, the encouragement that the Trump Administration gave them through its ambassadors and envoys in the Old Continent. “Trump’s ambassadors were dedicated to propagating populism, insulting the EU and trying to erode the democratic system in general,” Islam accuses. Perhaps the most belligerent of all diplomats from Washington was Richard Grenell, strategically stationed in Berlin and special envoy in the Balkans to mediate between Serbia and Kosovo. Grenell came to be described in Germany as “a biased propaganda machine.” As soon as he arrived in Berlin and in the midst of the rise of the far-right AfD, Grenell assured that part of his task as a diplomat was “to empower other conservative forces in Europe”, alluding to the replacement of traditional parties like Merkel’s.

The loss of Washington’s diplomatic encouragement and the financial support Bannon tried to channel may weaken European populists. Among the potential victims, the current British Prime Minister, Boris Johnson, stands out, although he does not fit into the classification of pure populism, he has clearly shown his good harmony with Trump. After Brexit, Johnson hoped to reach a quick and advantageous trade agreement with the United States, thanks to that privileged relationship with the White House, which would force the EU to accept similar terms. London’s pact with Washington did not arrive and the entry of Biden further removes that possibility, which will force Johnson to adjust his negotiating position with Brussels less than 50 days after the December 31 exit of the United Kingdom is consumed. The EU.

Zerka also believes that the US ultraconservatives will focus for the next four years in opposition to Biden and in trying to return to the White House, which will leave leaders close to Trump, such as Johnson, Orbán or Kaczynski, without interlocutors. available in Washington. Islam, on the other hand, is convinced “that the transatlantic populist collaboration is going to intensify because these forces have a long-term agenda and the experience of the United States has shown them that those that have not yet seized power can do what”.

Analysts do agree that the serious economic crisis caused by the pandemic, whose greatest impact could come in the first half of 2021, will give European populism the opportunity to recover lost ground. In recent months they have been displaced by the emergency aid and fiscal stimulus measures adopted by most of the governments. “But if the pandemic continues, frustration will increase and populist leaders are aware that they will be able to get their message across,” predicts Zerka. Without Trump and with the pandemic in between, European populism is touched but not sunk. Just crouched.

Outside of Europe, Brazil is one of the main exponents of populism. The electoral result of the United States supposes for Bolsonaro, in addition to a personal displeasure, a political and diplomatic setback. First, you lose your most strategic and powerful ally. And also “the narrative that this is a type of government for the future, at the forefront of the political process, has been defeated,” explains Oliver Stuenkel, from the Getulio Vargas Foundation. Good news for those who believe in democracy and open societies.

The arrival of Trump to the White House in 2017 gave wings to the electoral victory of Bolsonaro, his most faithful disciple, but it is not the only factor that explains it. The Brazilian fits magnificently into the Latin American caudillo tradition. The first consequence for Bolsonaro’s Brazil is that, without a Trump in power attracting most of the attention, scrutiny on the Latin American giant will increase. And “with Biden supporting multilateralism and the environment, the cost of Bolsonaro’s radical action abroad is going to increase a lot,” adds the analyst.

But moderating his positions both outside and inside Brazil implies an erosion of the fundamental support that his more ultras supporters give him. Brazilian foreign policy has taken an enormous turn this biennium to focus on issues that, in tune with the Trumpist White House, activate its most loyal electoral base such as punctual and strident criticism of China, alignment with Israel, defense of values Christian conservatives, the battle against feminism or minority rights. Brazil is going to be isolated as ever, but the president’s popularity improves despite his explicit refusal to manage the pandemic that has caused more than 160,000 deaths while the unemployed now number 14 million. Bolsonaro showed his political instinct by swiftly passing one of the largest public aid packages in the world, which has cushioned the blow and skyrocketed his popularity.

Another of Trump’s great allies in Latin America is Andrés Manuel López Obrador in Mexico. Biden’s victory has upset the foreign policy of the Mexican government, which maintains its refusal to congratulate the Democrat, reports Jacobo Garcia. Trump’s reaction after the defeat is reminiscent of the public protest that López Obrador launched in 2006 when he lost the presidential election by a narrow margin of 250,000 votes to Felipe Calderón and mobilized thousands of followers in the streets. That caused an unprecedented institutional crisis.

At the same time, Trump’s victory demands from López Obrador an unusual political waistline for him. The president will have to recycle the good relations he had forged with Trump, whom he always refers to in glowing terms as a respectful president. The good relations he claims to have with him have meant, deep down, silently enduring each of Trump’s attacks and allowing the Republican to use insults against Mexico since his first campaign in 2016 as a way to add votes among the most racist electorate.

Subscribe here to newsletter about elections in the United States